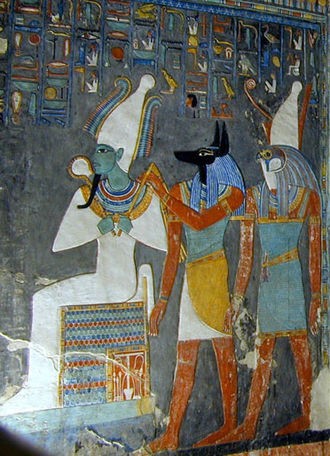 Illustration: Osiris, Anubis and Horus—only a few of the many gods of Egypt

We often hear that the Ten Plagues were designed to show the Egyptians that their beliefs in their gods were futile. Those gods had no power—which is tantamount, in ancient terms, to saying that those gods do not exist.

I myself have heard this explanation for half a century, and it certainly makes sense. It rests upon a verse in this week’s Torah reading: “against all the gods of Egypt I will execute judgments” (Exodus 12:12). But it is frustrating to me that I have not found the next step in the argument. Specifically, how did the God of Israel target by gods of Egypt by means of the Ten Plagues? When I asked the question of my teachers, the answers were incomplete. They pointed out that the Nile, the sun, and the Pharaoh himself were worshipped as gods—that accounts for the first, ninth and tenth plague. Then they continued, “and so on.” I’m ready to be persuaded, but I want to know the details of the “and so on.”

Here is my attempt at filling out the list. I am no Egyptologist—some of my information comes from James Putnam, An Introduction to Egyptology, and I have also been guided by Scott Ashley and Mario Seiglie, “The Exodus Plagues: Judgment on Egypt’s Gods” in the Christian publication BTmagazine (March-April 1029). I would welcome suggestions from anyone who has looked into this topic. We should remember that there were so many gods in the Egyptian pantheon that it is quite possible for more than one god to have been targeted by any of the plagues.

Plague #1. The water of the Nile turned to blood. Osiris, god of the underworld, was one of the major deities of the Egyptian religion. He was connected with the Nile-- Egyptians regarded the Nile as this god’s bloodstream. Turning the Nile waters into blood would have been an appropriate opening overture in the campaign against the gods of Egypt.

Plague #2. The goddess Heqet, venerated as the goddess of childbirth, was depicted as a woman with a frog’s head. She was an “ancient goddess”, considered to have been the consort of the creator of the world, and such was the respect paid her that stepping on a frog was considered a capital offense. That would have been inevitable during this plague. The Egyptians were being hoisted by their own petard.

Plague #3. I see the plague of lice as bringing judgment upon the god Geb, the god of the land and crops. The connection is in the instruction to Aaron: “Stretch out your rod and smite the dust of the earth” (Exodus 8:12) so that the earth will become lice. Instead of bringing forth its bounty of nutritious plant foods, it will bring forth a pestilential insect.

Plague #4. The swarms of insects of this plague lead us to look for another Egyptian god connected to insect life. The Egyptians venerated the beetle. (Perhaps some of our film buffs remember that the idol unable to revive Pharaoh’s dead son in the original, 1923 version of The Ten Commandments had a scarab beetle head. That movie prop was a Hollywood icon for decades.) This would target the god Khepri, who was depicted as a man with the head of a dung beetle. This was the god credited with creating the morning sun.

Plague #5. The plague against livestock could plausibly have targeted several major gods, including Ptah, represented by the “Apis bull”, and Atum and Re, who were represented by a black bull. If I had to vote for one goddess, it would be Hathor, depicted as woman with a cow snout. She was considered to be the divine mother of the Pharaoh. Sickening Hathor at the half-way point of the plagues strikes me as a foreshadowing of the plague destroying the first-born, including the first-born son of Pharaoh, in the tenth plague.

Plague #6. The plague of boils could have impacted any of the several Egyptian deities venerated as gods of healing. Since the biblical narrative specifies that the Egyptian magicians themselves were afflicted, I would regard this plague as a judgment upon Thoth, the god depicted as a man with an ibis head, the patron deity of medical learning.

Plague #7. Since hail destroyed vegetation, this may have been another blow against Osiris; or perhaps since the plague was initiated by Moses being told to “stretch forth [his] hand toward heaven” (Exodus 9:22), the Egyptian god being judged here was Horus, depicted as man with a hawk’s head, venerated as the sky god.

Plague #8. The plague of locusts devastated the fields, consuming whatever edible plant life had survived the hail. So perhaps the god being judged was Anubis, depicted as a man with a jackal’s head, venerated as the guardian of the fields.

Plague #9. Here, it seems clear that the Egyptian god being judged is the sun god, variously known as Ra or Aten, and sometimes identified with the supreme god, Amon. This penultimate plague takes down the god considered by many Egyptians to have been their chief deity. The stage is set for the final plague…

Plague #10. Astute Bible readers will remember that God threatened Pharaoh with the death of the first born as far back as the dialogue with Moses at the Burning Bush. All nine of the plagues prior to this one could therefore be understood as the prelude to the tenth plague, which alone would be decisive. This plague targets Pharaoh himself, killing his own first-born. Pharaoh was himself venerated as a god. Destroying the Israelites’ faith in Pharaoh was a necessary psychological preparation for bringing them to Mt. Sinai and having them accept the God of Israel as their only God.

As a closing exercise, I invite you to consider that the plagues against that which the Egyptians worshipped could be understood as a paradigm. What are today’s plagues? Could you see them as judgments upon the skewed values of our own society? Is the environmental devastation we have loosed upon the world a judgment upon our false god of hubris? Our false god of economic development at the expense of sustainability? Our false god of making a fast dollar?

“The deeds of the forefathers are a signpost for their descendants,” say the Rabbis. Let us learn the necessary lesson!