WHAT THE PRIEST CAN’T DO FOR YOU 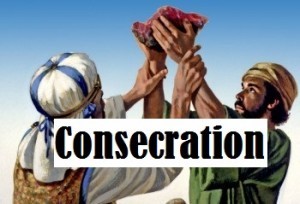 The LORD spoke to Moses, saying: Speak to the Israelites thus: the one who presents his sacrifice of well-being shall bring his offering to the LORD…His own hand shall bring the LORD’s food gifts… (Leviticus 7:28-30)

We are accustomed to thinking about the ceremonial religion of the Biblical Israelites as a series of actions performed by priests. The laity observed from a safe distance; only the priests actually did the sacrificing. By contrast, the Rabbis democratized the practice of Judaism. Forced by circumstance—the destruction of the Temple—they elaborated a form of Judaism emphasizing Torah study and the performance of the commandments that all Jews could perform.

A recent commentator on the priestly writings of the Bible, Rabbi Jacob Milgrom, explains why this sacrifice is connected with joy:

“The main function of the well-being offering is to provide meat for the table. Assumed is that nonsacrificial slaughter is illegitimate… and that whenever an Israelite craved meat he would first have to offer his cattle, sheep or goat… as a sacrifice. Such an occasion was rare, for only… aristocrats could afford the depletion of their flocks. For the commoner, the occasion had to be a celebration… even a clan celebration—hence the joyous character of the sacrifice.” (Milgrom, Leviticus 1-16, p. 221).

Meat eating was thus much less common for our ancestors than for (non-vegetarian) Jews today. But the specialization of the work of killing the animal remains. Just as today, most meat-eaters are not themselves slaughterers and butchers, so too, in the Bible, the individual offering—and consuming-- the animal did not personally slaughter it. That was still the work of the priestly expert.

In what sense, therefore, did the individual participate in the ritual? By a ceremonial gesture, known as tenuphah: he elevated the offering, showing its dedication to God. (Milgrom, p. 470)

The Rabbis described the “hand-off” of the meat portion from layman to priest in this ritual of elevation. The provider and the priest cooperated in holding the offering, the hands of the priest supporting those of the layman. (Sifra, the portion Tsav, 11:3)

We have not performed these sacrifices for nearly 2,000 years. But the principle remains valid. Sophisticated societies feature professional specialists, and clergy are among them. They are needed for certain aspects of being Jewish, but they can not live your Judaism for you.

The Rabbi is your teacher, not your designated driver.