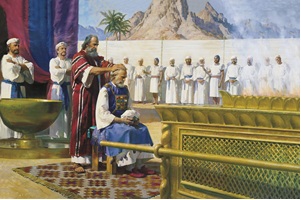 The elitist side of Judaism is on display in this week’s Torah portion. The ambitious Levite, Korah, attempted to oust his cousin Aaron and replace him by a Levitical junta under his own leadership. Concurrently, Datan and Aviram, two of the captains of a would-be kaffiyah-mafia from the tribe of Reuven, attempted to regain the lost primacy of their tribe by rebelling against Moses. The biblical account has them fail in the most spectacular fashion: the earth opens and swallows them up! Moses—he’s the Man: don’t mess with him! Miriam, his own sister, who dared to criticize him, got away with a nasty seven-day course of leprosy, miraculously inflicted and miraculously healed. But for muttering, mutinous rebels outside his immediate family, God won’t be Mr. Nice Guy. More gently, God confirms Aaron’s leadership by making his, and only his, staff sprout overnight—a soft miracle, suitable for a peace-loving leader.

Elitist Judaism seemingly ended with the Destruction of the Temple. No Temple, no sacrificial cult, so no priestly oligarchy calling the shots. Rabbinic Judaism, coming to the fore after the Destruction, went the egalitarian route. After all, anyone willing to go through the grueling “48-step” regimen of becoming a rabbi (Pirke Avot 6:6) and who succeeds in study can achieve that title. It’s not a matter of “What’s your name; Who’s your Daddy?” The Egalitarianism of Rabbinic Judaism meant that nobodies rose to the highest places within the rabbinic circle. They did so, not because they started out with greater privilege (some were rich, granted, but others were achingly poor). The giants of the Rabbinic Era achieved preeminence on the strength of their human accomplishments.

There is a tug-of-war here, too. Who can afford such vast investments of time into learning? But throughout Jewish history, the community has attempted to keep the leadership from becoming an exclusive status-marker by subsidizing the higher education of its talented aspiring scholars. My grandmother told me that her parents, in Tsarist-era Byelorusia, had yeshivah students eat at their table on a regular basis. That was the form of charitable support extended even by people of modest means to the still-poorer students in their midst.

The non-Orthodox denominations of Judaism have extended the egalitarian impulse in our own day. Rabbinic ordination was originally limited to men, despite the presence of outstanding women Torah scholars in Classical times and in the Middle Ages. That has changed. In Germany, one woman became a Reform rabbi earlier in the 1930’s. In America, and now in Israel, Reform, Reconstructionist and Conservative Judaism have been ordaining women as rabbis for nearly half a century.

But the elitist impulse endured, and came bounding back in Hasidism, where it is still going strong today. The zaddik of a Hasidic sect is not at all a community rabbi in our watered-down, secular sense. The Hasidim believe that he (always a “he”—elitism for women in these anti-secular societies exists, but in a muted form) is a “Man of God” in a primal sense. The zaddik is close to God, Hasidim believe, to the point of having pull with the Powers of Heaven. His Friends in High Places endow his prayer with so much potency that he is, in essence, a miracle worker—or so the belief-system would have it.

One of the enduring testimonials to human credulousness is the persistence of belief, not just in such spiritual super-humans, in general, but more specifically, that their unique powers can be passed along dynastically. Haven’t we learned from millennia of monarchy that the founding fathers of dynasties are generally able (if unscrupulous) as well as ambitious, whereas the descendants, already born to the purple, are more often run of the mill or less? Being born on third-base is not the same as hitting a triple. Similarly, the Hasidic movement, energized at the start with a constellation of extraordinary spirits, soon devolved into the dynastic principle, each rebbe inheriting his status. All too many came to believe the hype. Astounding leaders continued to emerge, but they were the exceptions to the rule.

But at least in Hasidism, the individual Jew still felt (and still feels) the responsibility to say “yes” to God’s offer of Covenant. In non-Orthodox Judaism, the need to find an effective and life-enhancing surrogate for simple obedience to the Commanding Voice remains a defining problem. All too often, our love of autonomy buddies up with narcissism and leads not to mature self-discipline but to anarchy.

Ultimately, the problem with elitism in religion, in today’s westernized Jewish world, is not that some individuals achieve more than others. That is an irreducible fact of life. The problem is that God’s Word is meant to make every single one of us the best version of ourselves. We can not do that by delegating the religious life to one leader. The elitist mind-set becomes a servant to spiritual laziness. Let the rabbi eat the tuna fish sandwich—the really good stuff is what I will eat in the non-kosher deli! And that is a relatively benign failing, as such things go. Rabbis are not priests, charged with the danger and privilege of approaching the Sanctuary; hence, we need to challenge ourselves to walk the walk that brings us closer to God.

Aaron’s staff blossomed, confirming his legitimacy as High Priest. But that’s only the first act in a drama that continues to be written.