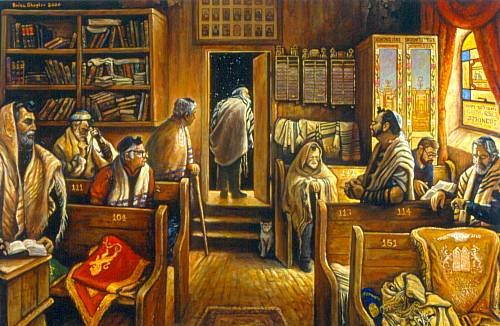 Illustration: “Waiting for the Tenth Man”

“Rabbi, why do we need 10 adults for a minyan? What if God had created us with 8 fingers instead of 10--- would a minyan have been 8, in that case?

“Rabbi, why do I need a minyan to say kaddish? Can’t I say kaddish at home? Doesn’t God hear prayers from wherever they are given? “

How do I begin to answer? I strive to hear the question behind these questions—because the same words actually represent a number of different questions. My questioner may be a faithful and disciplined Jew who takes time out of her day to come to services and is frustrated that, on account of other people not caring enough, her investment of time and self is going unfulfilled. Or the questioner may be someone who misses his departed relative, who is genuinely mourning, but who just doesn’t get much out of the rapid-fire Hebrew service…. Or who doesn’t see the utility of driving 30 minutes for 15 minutes of communal prayer… or who is simply not in the habit of taking time to worship… or who is temperamentally not a person to subordinate his autonomous control of his time to some requirement that comes from outside… after all, it’s a free country.

I don’t think the questioner really wants me to walk through the rabbinic process of going from biblical narrative to legal requirement. That’s not such a strong case, anyway. Abraham bargained God down to 10 and stopped there. The 10 spies were a “community” of opinion. I have the strong sense that these are ex post facto explanations, that 10 was a conventional number even in the time of Abraham. If it is a byproduct of evolution, so be it. You need to have some number, if you have the concept of a quorum, and you could ask the same question no matter what the number would have been. Every system has some point of arbitrary definition. Every stack of plates has a bottom plate.

No, the place to focus on is the concept of quorum itself. Why do we insist on a quorum for certain kinds of prayer? And does my questioner know that not every kind of prayer needs a quorum? Even memorializing the dead can be done alone. You light the yahrzeit candle alone, and you can say words of prayer in that solitary setting; not the kaddish, but other words. I think I’ll give him some prayers from our tradition that he can say at home…. But will that make him less likely to come to minyan?

The Rabbis say that we need a minyan for “d’varim she-bik’dushah”, matters dealing with holiness. Lots of important Jewish statements about God are not that. God is good. God is the Creator. God is the Revealer. God is the Redeemer. No minyan is needed for any of those prayers…. Only for prayers that proclaim God’s holiness.

That’s it: proclamation. Holiness, in Judaism, is a concept that is connected to the act of someone telling it to others. Sancho Panza “tells all the world proudly” that he is Don Quixote’s squire; he’s his friend. We want to tell all the world proudly that the One God is Holy. If we can’t tell the whole world just now, we will tell each other. If we can’t tell all the Jewish people at once, we will tell at least some recognized public gathering. That’s why we need a quorum.

So that’s a start. But I need to convey more. I need to explain to my questioner why that requirement is wise.

The answer comes to me, not from the books, but from the experience of being in the minyan itself. Minyan-makers obviously share important values, because we are here; but in no way are we clones or drones. Personality differences are not submerged in the minyan. Each person’s individuality is felt. It’s the best daily example I know of e pluribus Unum… certainly better than the fractured society that is our country these days.

There’s more, too. Waiting for the tenth teaches us that we can’t do it alone. Minyan makes community; and community is the key to the survival of a faith as unpopular as Judaism must necessarily be. We teach the world not to gratify ego, not to dumb God down to our level, not to worship ourselves, not to worship the Small. That will never be popular. If we are going to persist, we have to strengthen each other. Hazak, Hazak, ve-nithazek.

There’s still more. The minyan is made up of adult Jews. It is not made up of “A” students, of above-average elitists, of Fortune 500 executives… it is made up of adult Jews, rich and poor, smart and…. not-so-smart, easy to deal with and difficult to deal with. That last part requires discipline. People say they want their numbers to grow, but sometimes they prefer to hang out only with the like-minded and the socially savvy. Minyan is a cure for that.

Finally, minyan tells us that no one is perfect. We dare to stand before God, so let’s accept each other, in all our shared humanity. From that basis, we can stand together.