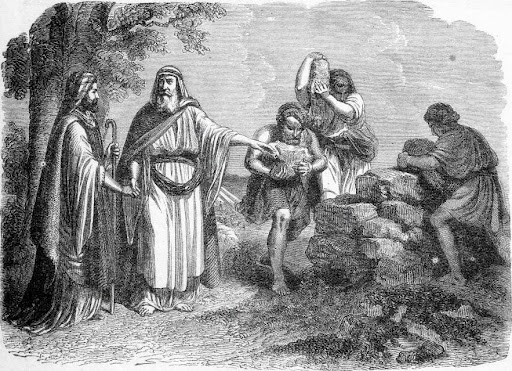 Some scoundrels are just thugs. They steal and smash. From the men of Sodom, to Cossacks, to Nazi Brownshirts, the violent criminals of every generation are menaces to civil peace because they employ force to accomplish their narcissistic or sociopathic desires.

Other scoundrels, no less evil, are law-abiding. They accomplish immoral ends under the cover of law-abiding behavior. These are the corporate polluters who destroy lives and communities and yet are in compliance with the conveniently-weakened environmental protection laws. These are the large retailers guilty of systematic wage theft of their mostly minority and poorly educated work force, employers who routinely settle class action suits out of court and manage to have no judgment entered against their continuing pursuit of the bottom line coming out of the flesh of their employees. These are the “haves” who successfully create an uneven playing field, and then protest that they are after all playing by the rules.

Laban is that kind of scoundrel. He has legal justifications for all his skullduggery.

When Laban plays “bait and switch” on Jacob’s wedding day, substituting Leah for Rachel, he is of course morally culpable… but he might well have escaped a guilty judgment in court. That is because he never quite explicitly agreed that Rachel would be the bride under all future conditions, including the eventuality of Leah’s remaining unmarried after Jacob’s seven years of service. What Laban actually said, in response to Jacob’s suit, was, “better that I should give her to you than that she should marry an outsider.” Imagine Laban pleading his case before Judge Jew-dee. Laban could certainly build a case that his statement had not been an unqualified acceptance of Jacob’s marriage proposal. Better that Rachel should marry the penniless kinsman, yes, but if Laban had wanted to say clearly, “I give you Rachel’s hand in marriage, under all circumstances,” he would have said so clearly. Rather, he assented to Jacob’s proposal conditionally: “You may marry Rachel after seven years of service to me, your labor counting as the dowry, assuming that Leah has not been married off during the interim. Otherwise, your service will count as dowry for my eldest daughter, the priority of whose marriage is the universally revered custom in our society.”

At the end of the Laban-Jacob drama, we see a similar situation. Laban protests that he is strictly within the law. I believe that this is the correct interpretation of Genesis 31, and that it has not been sufficiently recognized as such.

The facts of the case are summarized in the Biblical chapter. After 20 years, Jacob has finally obtained his wages. God appears to him and tells him that it is time to return to his native land. He does something that Laban would never do—he consults his wives, Laban’s daughters, and they give their unanimous consent to the move. So, they leave. Laban learns about it and sets out in hot pursuit. Before Laban can overtake Jacob, God appears to him in a dream and warns him not to harm Jacob in any way.

Then they have their meeting. Laban protests that Jacob has behaved in an uncivilized way, and then levels a specific accusation—someone in Jacob’s party has stolen Laban’s household gods. This charge is in fact, correct—Rachel was the guilty party. But Rachel manages a Laban-like subterfuge to hide the idols from her father—she has obviously learned well how to live like a Laban. When Laban comes up empty-handed, Jacob turns on him in a strongly worded suit. Laban responds:

Bible scholars have labeled his retort “empty rhetoric”. I beg to differ. Laban is claiming the rights of the owner of an Israelite slave, according to Exodus 21:4: “If his master gave him a wife, and she has borne him children, the wife and her children shall belong to the master, and he shall leave alone.”

Laban is wrong. Jacob was not his slave, and Jacob’s labor was a dowry, not the repayment of Laban’s purchase price. But that would not stop a Laban from citing it in his legal brief. For people such as Laban, the words of the law are simply the topography of the battlefield. When they cite legal texts, it is not because they have respect for justice or for any interest greater than their own. It’s how they fight the fight.

Laban is, in the words of the famous rabbinic commentator, Nachmanides, a “nabhal bit’hum ha-torah: “A perfectly law-abiding scoundrel.

God save us from the Labans of the world!