The Deep Roots of the “Disloyalty” Charge

“Watch yourself… in case you’ll inquire about their gods, saying,
‘How did these nations serve their gods?—and I’ll do that—I, too.’
You shall not do this for the LORD your God, because they did every
offensive thing… they would also burn their sons and their daughters
in fire to their gods! (Deuteronomy 12:30-31) 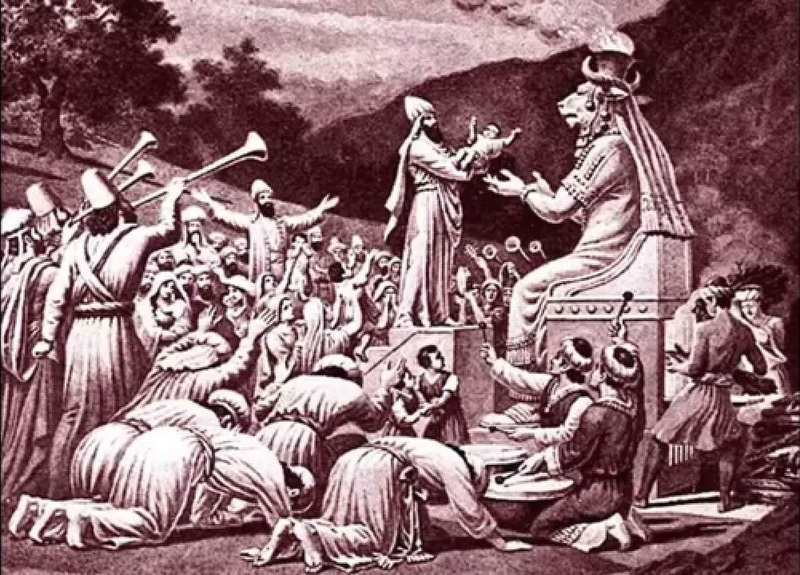 Illustration: Rendition of the sacrifice of a child to the pagan god, Moloch

In recent months and weeks, our already fractured society has been further roiled by charges of “Jewish disloyalty”. These charges have come from both Left and Right. Granted, there are different nuances in the various uses of “disloyalty”. But let’s focus not on 2019, but on earlier times, to see where this charge comes from, and why it is so hurtful.

The Jewish people were the first monotheists in history. Their unique status put the Israelites on a collision course with the pagan nations of their day, and the literary echoes of that opposition remain in the Bible. Despite two millennia of Jewish reinterpretation and championing of the ethical and tolerant side of our faith, these harsh words, preserved in our constitutional document, remain as ammunition for anti-Semites to cherry pick. They quote the Bible to “prove” that Jews hate all humanity. They then justify their aggression against our people as a defense of civilization against the menace that we embody.

As the biblical quotation at the head of this essay shows, what the Bible specifically opposed about paganism was not its embrace of many gods, but the unethical consequences—for those peoples—of that belief. The Bible did not know the peaceable and neighborly Wiccans of today. It knew child-murderers in the name of religion.

But the result is that Jews seek to be different. That itself is a provocation to xenophobes of all stripes and all ages.

In the biblical era, we differed by being in a covenantal relationship with our One God. For a half-millennium after the day of the Bible, living under a succession of pagan rulers, we were usually able to maintain that uniqueness. Times were occasionally very bad under the Greeks and Romans. But usually, the basic bargain held: we rendered loyalty, in the form of coin and quiet, unto Caesar, and we rendered worship and lifestyle unto God. The term of art in those days was “customs of our ancestors”. Pagan rulers such as Antiochus III (the father of the bad guy of Chanukah) granted charters to the Jewish people, allowing us to follow the customs of our ancestors. In return, the taxes flowed smoothly.

It became harder for us, overall, when monotheistic empires arose, displacing the pagans. Jews living, first under Christianity, then under Islam, found themselves ruled by adherents of rival faiths, not simply different faiths. The Jews had rejected Jesus. The Jews had rejected Muhammad. There would be consequences for that “infidelity”.

In Christianity, there were two schools of thought about “what to do with the Jews”. The view of St. Augustine produced discrimination but not expulsion. In his theology, the Jews’ rejection of Jesus triggered God’s rejection of them and consecration of Christians as the real “Israel”. If Jews were obviously second-class, they were useful in Christian society as a reminder to Christians of God’s favor. (Obviously, there were economic and social factors at work there, too.) The rival view, of St. John Chrysostom, produced quarantine and expulsion. He claimed that the Jews were so dangerous that Christians needed to shun them completely. Eventually, his view prevailed, leading to a wave of expulsions of Jews from Christian countries in the later Middle Ages.

But what the two schools of Christian thought had in common was the view that by being different, the Jews were already a problem. The idea that Christians and Jews might live together as fellow citizens on a basis of equality remained completely beyond the horizon of thought until the 17th and 18th centuries.

In Islam, the Jews and Christians were lumped together as two inferior forms of monotheism. They could be tolerated only when they had been subjugated and they acknowledged their submission. In practice, this meant that Jews were required to pay a poll tax (the jizya), often accompanied by ritual humiliations. This explains the total inability of classical Muslim thought to accommodate itself to the notion of an independent state of Israel. Jews might live under Muslim protection as dhimmi, a protected, second-class corporation, but to live as an independent nation, equal in status to its Muslim neighbors, is beyond the pale.

So, in their classic forms, both Christianity and Islam regarded the Jews as a problem to be dealt with. Each demanded Jewish self-abasement as the condition of toleration. Muslims rode horses; Jews rode donkeys or walked. Christians walked the streets armed; Jews needed to stay indoors during Easter week.

This long-established pattern of inequality was challenged in Modern times. At first, there were isolated experiments of toleration, such as Roger Williams’ colony of Rhode Island. Then, the American and French Revolutions produced a radical new notion—citizenship based on geography, rather than corporate status based on ethnicity, caste, or social status. A French citizen was someone born in France; an American citizen, one born in America—regardless of religion. What a strange, new concept!

In every age, some people resist change. A generation after the radical improvement in Jewish status accomplished by the French Revolution, the peasants of Alsace petitioned the Emperor Napoleon to revoke it. Napoleon ratified the citizenship of French Jews, but at the cost of compelling the Jews to declare that their religion was strictly a private matter.

As Napoleon defeated one German state after another, he extended this system. In several instances, French soldiers literally broke down the ghetto walls.

Reaction set in after the defeat of Napoleon. At the Congress of Vienna, 1815, the German states revoked the citizenship of the Jews, telling the Jews that they would have to earn their citizenship by changing their allegedly anti-social ways. This was the political framework for the birth of Reform Judaism. It was a program to prove that Jews could be good citizens of Germany, by soft-pedaling any behavioral differences produced by Jewish ritual observance. Loyalty meant conformity to social norms of the majority. Jewish ceremonial was rendered problematic in a new and insidious way.

The accusation that a good Jew is perforce a bad candidate for citizenship is why Classic Reform was anti-Zionist. In its 19th century context, supporting the idea of a reborn Jewish state seemed contrary to the quest to be accepted as a good German or a good American.

Reform Judaism as a whole broke from its doctrinal anti-Zionism in 1937, as a response to Hitler. But an anti-Zionist faction remained. Here in Norfolk, the anti-Zionist “American Council for Judaism” endured even after 1948, part of the legacy of nervousness about being first an American, only second, a Jew—a sign of insecurity that only faded away in the climate of increased ethnic assertiveness of the 1960’s and beyond.

Today’s news-cycle eruptions are actually the tip of the iceberg. When we see how entrenched is the idea that Jews are different, and therefore, already potentially or actually a problem, and that the self-effacement of Jews was the price demanded for even limited toleration of their presence, we can understand that “disloyalty” was a charge used to keep the Jews in their inferior place.

The charge is a child of bigotry, and it needs to be resisted, whether it comes from Left or Right.