SO: YOU’VE LANDED IN A WASTELAND. WHAT NOW? 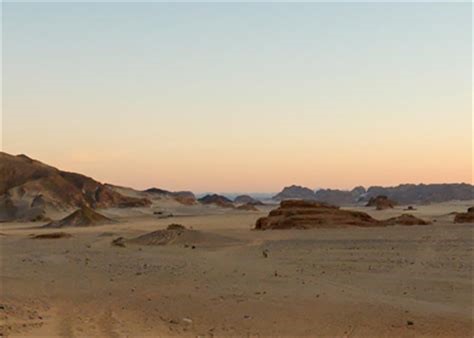 Illustration: The Sinai Desert. Credit: www.bibleodyssey.org
Some stories speak to us even though, like Star Wars, they are set “A long time ago in a galaxy far, far away…” That is because we recognize the human connection, across the miles and the eons.
So is it with the stories of the Bible.  Set in the lands of the Near East during the Bronze Age and early Iron Age, they transcend their settings and speak to us in our human condition.
The Bible is relevant because it is not kid stuff.  We misunderstand it when we make it the grist of children’s stories. It is about many of the grim challenges of life.
This year, I feel that our situation is close to the reality reflected in the stories of the Book of Numbers. The salient features of life today-- political upheaval, the breakdown of international and societal norms of behavior, the curses of terrorism and warfare, and the ongoing reminder of the lethal potential of nature— make us feel as though we are in a Wasteland.  The Book of Numbers is located exactly there—in the Wilderness, the Wasteland, the land unsown.
The lessons of the stories in the Book of Numbers, therefore, are life lessons for us today. They show us what to be sure to do, when we find ourselves in the Wasteland that life sometimes can be.  Consider these six lessons-- they ought to be a wake-up call for us, today:           The Book of Numbers begins with a census of adult male Israelites. (That’s why the English translation of the book calls it “Numbers”). I would have been happier had the census also counted women and children. Its limitation to adult males had to do with the enrollment in the military, which was confined to adult males.  But the main point is clear: people count. That is the basis of everything else that you want to build in your society.
And what of us? In America today, we are in the midst of renewed attempts to disenfranchise voters. The voting rights gains of the Civil Rights era are in more danger today than at any time since 1965. Our democracy is under siege. Are we making people count? Or are we transgressing? As a Jew, I believe that societies, no less than individuals, stand in judgment for their moral character. How will we be judged? 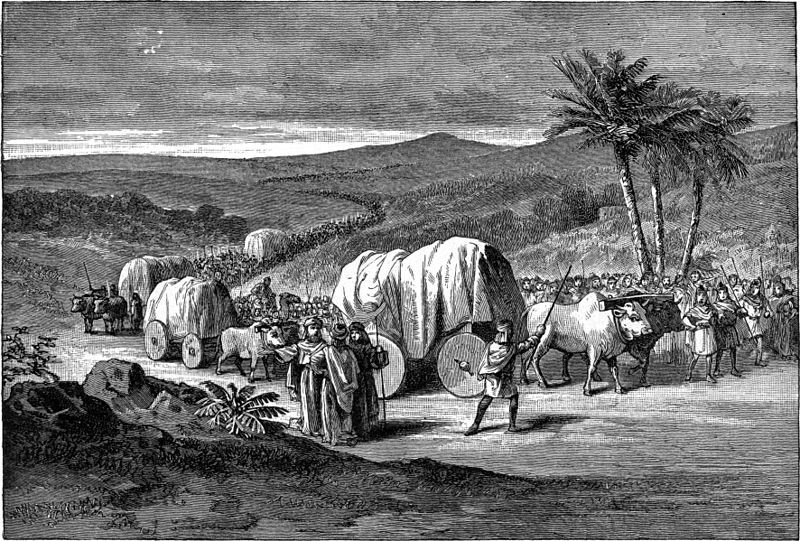 Illustration: Charles Foster, “Journeys of the Israelites”, Bible Pictures and What They Teach Us (1897)
Each tribe had an assigned place in the camp in the Wilderness. “The children of Israel shall pitch their tents, every man with his own camp, and every man with his own standard.” (1:52) Each tribe had an assigned position in the order of march.  (10:14-28) And each tribe had a tribal allotment of territory for the ultimate settlement in the Land of Israel. (34: 13)
Today, we need to know our neighbors better. Among our fellow Americans are increasingly many dangerously one-sided souls, alienated from the moderating influence of actual contact with those who think differently from themselves. For such people, our technological surrogates for actual personal interaction produce not real community, but only a reflection of extremism.  Radicalized by their addiction to the echo chambers of their social media channels, they stop seeing the humanity of their actual neighbor. Thus are we creating more mass murderers. We are becoming, again, in the words of the Book of Numbers, “The land which devours its inhabitants.”  (13:32) 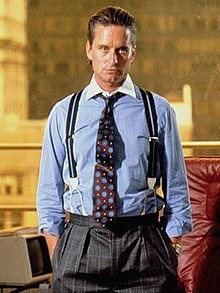 Illustration: The actor Michael Douglas, portraying the fictional character Gordon Gekko in the 1987 film, Wall Street.
The Book of Numbers devotes many verses to its description of the order of encampment and the order of march of the Israelites during their Wilderness sojourn. It’s important not to lose sight of the underlying point. They were in a place filled with dangers and having God in their midst was their best hope of survival.  At times that meant surrounding their holy site, and at other times, following its lead.
Are we keeping God in the center of our lives, when we regard the spiritual dimension as some sort of add on to the real factors that concern us in own daily and weekly concerns? Are we following the lead of God when we face the pressing problems of the day? When we weigh the economic and the political dimensions of a decision, are we also weighing the ethical and the spiritual? A prominent leader in the regional business community once challenged me after hearing a sermon of mine: He said, “Rabbi, did it occur to you that there are some businesses where you can’t afford to be ethical?”  I believe, rather, that the scandals that overwhelm one corner-cutter after another, should be our reminder that there are no businesses where you can’t afford to be ethical.  The 1987 movie character Gordon Gekko, preaching that “greed is good,” was a distillation of some of the notorious white-collar criminals of that era, but the problem endures today. It will endure as long as people do not put God in the center of their concerns, and do not follow God’s lead when they move forward in life. 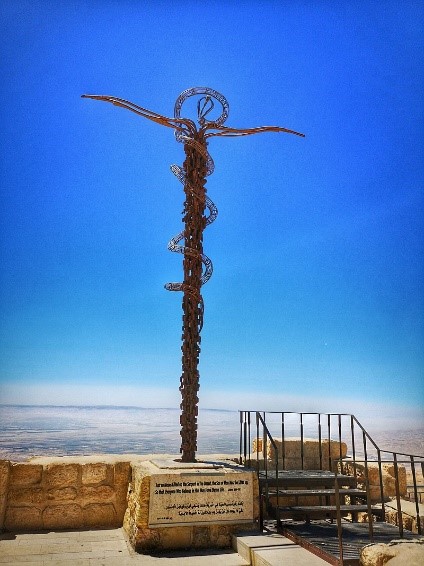 Illustration: Bronze Serpent sculpture, Church of Saint Moses, Mt. Nebo, Jordan (2018)
In Numbers 21, a cautionary tale is told, based on a memory of one of the hardships endured by the people in its Wilderness sojourn— snake bites, often fatal. The species of snake is not specified, but it might well have been Cerastes cerastes, the Saharan horned viper, whose range includes the Sinai. According to the tale, the Israelites were kvetching—yet again—and God punished them by sending “fiery serpents.”
The repurposing of the old folk memory under the overall editorial thrust of Numbers—to preach fidelity to God—is clear.  Going back to the story, we can glean a lesson for today.  We are unfaithful to God’s commandment to all humankind, through Adam, that we “tend as well as till” the Garden that is this Earth. The emerging illnesses of the past three years ought to remind us that there are limits to the earth’s ability to withstand human recklessness without inflicting damage on the environment, damage that will inevitably rebound and hurt us as an entire species. 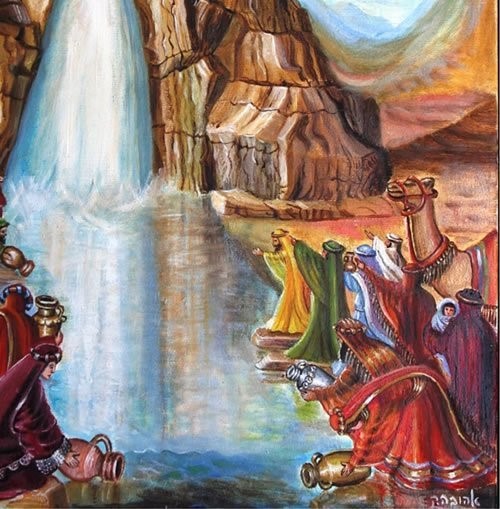 Illustration: Ahuvah Klein, “The Waters of Strife.” Credit: Chabad.org
One of the enduring puzzles of the stories in the Book of Numbers is the sin and punishment of Moses, at Meribah, the place known as “Strife” (20:2-13). It’s not easy to identify where he erred. Was it in hitting the rock, when God had told him to speak to it? Was it in misleading the Israelites into thinking that he and Aaron were responsible for the miracle, and thus undermining their fragile grasp of monotheism? Was it in failing to control his temper? None of the above? In Deuteronomy (1:37), Moses presents his inability to enter the Promised Land as collateral damage to the punishment of the Israelites as a whole. But what is clear is that Moses was identified with the desert generation, not the generation that followed, the one that entered the land of Israel under the leadership of Joshua. The ethical impulse of the Bible being paramount, it is understandable that our collective memory would have associated the death of Moses in the Wilderness with some failing of his.
The enduring lesson is that even the greatest of human leaders is only human, and therefore, fallible.  No one gets through life without making mistakes.  We can forgive our leaders for their mistakes, if we choose, but we should never fall into the cult of personality, regarding our leaders as above criticism.
And America, today… and for that matter, in Israel…  I hardly need to finish the thought.  The cult of personality is more dangerous in the two countries most dear to us today than it has been at any time within living memory.
George Washington was offered the crown. He wisely refused it, saying that we had already had enough bitter experience with one king named George—we did not need another. Liberty under law is our Pole Star.  To excuse a leader for disregarding the law, because we despise the politics of his adversaries, is the way that democracy dies. 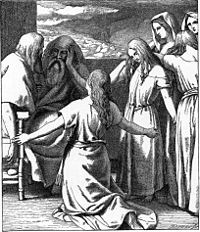 Illustration: Charles Foster, “The Daughters of Zelophehad,” Bible Pictures and What They Teach Us (1897)
The Book of Numbers, so filled with sad and sobering stories, ends on a more positive note. It tells us about the daughters of Tselophechad, five women who had no brother. On the eve of entering the Promised Land, they petitioned Moses and the new High Priest, Eleazar, to allow them to inherit the allotment that would have fallen to their father.  Under the old dispensation, since he had died without a son, his inheritance would have passed to his brothers. The daughters would not inherit; rather, they would be supported by their male relatives.  They protested that the law unfairly did away with the memory of their father. Moses hears their plea, refers it to God, and receives the answer: “The daughters of Tselophechad speak right!” (27:7) God changes the law, not only in their favor, but in all cases where daughters, and no sons, are the heirs.
This has much to say to us as Americans. We should not make a Golden Calf of the achievements of the past. “Our forefathers brought forth on this continent, a new nation, conceived in Liberty, and dedicated to the proposition that all men are created equal.” But the Founders did not achieve that fully.  Nor have we done so ever since.  There is much to repair in our society.
Patriotism should not be confused with loyalty to that which was sinful, or ugly, or misguided, in our past. Those of us who sing more than the first stanza of America the Beautiful know that a good American can be fully patriotic and still sing, “God mend thine every flaw.” Yes, we did, and we do, have flaws. The faux patriot is the one who refuses to see that. Such a person does not want us to be truly great. The true patriot is the one who wants us to be the best country we could be.
As a Jew, I believe that God speaks to us through the stories of the Bible.  I close this message, and this season of weekly messages, with the prayer that we will listen to these words, absorb these lessons, and do our part to mend our country and heal our world. Amen. (Note: for the next four weeks, the rabbi will be on vacation. Instead of a weekly message, you will receive his four-part series, “The Undiscovered Country” dealing with Jewish views of the Afterlife. The rabbi’s weekly message will resume the third week of July.)