WHERE WERE THEY GOING? WHERE ARE WE GOING? 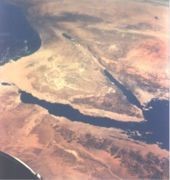 Illustration: The Sinai Peninsula and its environs, photographed from Gemini 11
What grounds our identity? Once you get beyond basic biological functions, in a significant way, we are who we are by virtue of the stories that we choose to tell.
The mother lode of our stories is the Bible. More than literature, it functions as saga. Its stories encode the values we seek to live by.
At this time of year, our Jewish engagement with the Bible focuses on the Book of Numbers. It’s a classic “on the road” story.  Our people were on a journey, and this is what happened to them; and this is how it changed them.

Illustration: The most widely accepted scholarly reconstruction of the route of the Exodus (in red)
When we look at the Book of Numbers as a whole, we see that, after leaving Egypt, the Israelites were moving (really or notionally) in five directions. Two of these directions were simply bad. The third was good in the short run but bad in the long run. The fourth and the fifth were good.
The first direction was one that, at their worst, the Israelites longed for-- but failed to accomplish. They repeatedly expressed the longing to go back to Egypt.
Now, the Biblical authors are often critical of the generation of the Exodus. They see them as the paradigmatic exemplars of faithlessness. Bless their Israelite hearts: They were the very people who witnessed the miracles, and still could not achieve trust in God!   I understand this judgment. It has much to teach us. But there is another side to the story, one that needs to be appreciated. We ought to remember that the Israelites bore the psychic as well as the physical scars of multi-generational slavery. 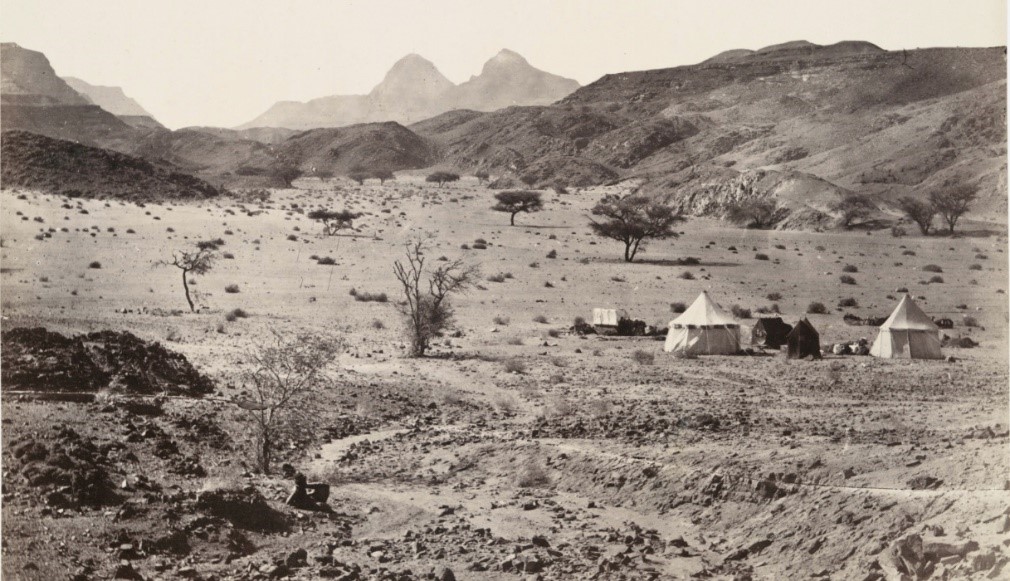 Illustration: The wilderness of Sinai, 1862
You can survive in parts of the Sinai, but it is a challenging environment. Not only did the Israelites (except for Moses himself) have no experience in desert living; they also had no experience in adaptation to the unfamiliar. Hungry and thirsty, they remembered where they used to live: the ranchland of Goshen, with its proximity to the eastern Nile Delta, and thus with access to freshwater fish and vegetables. When they said that they wanted to go back to Egypt, it was the PTSD speaking.
In pleading for understanding, I am not endorsing their wrong-headedness. Of course, they were wrong to want to go back to the forced labor regimen of Egypt and the episodic genocidal atrocities ordered by the xenophobic Pharaohs. Rather, I am reminding us: freedom has its costs, too.
And what about us? Have we not seen in the world today any number of states where people prefer stability to freedom? Consider the political successes of Xi Jinping, of Putin, of Orban and the like, the popularity of authoritarian and would-be authoritarian leaders in the so-called free world, too. The combination of hatred of the stranger and fear of the uncertainties of freedom still sings its siren song in our own ears. 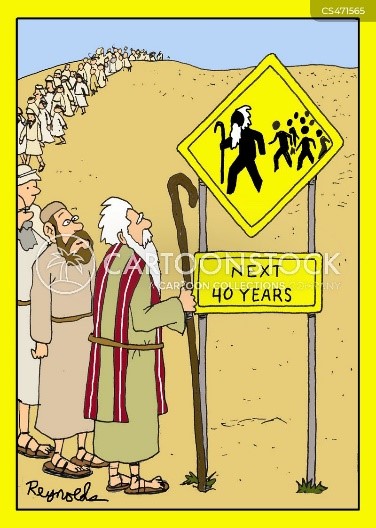 Illustration: Cartoonstock, Sinai Desert Cartoons
The second direction was--- well, apparently, directionless.  But I wonder if what appears to us as wandering was truly directionless. I suspect that the impression is caused by the unfamiliarity of later generations with the geography behind the narratives of our Wilderness sojourn.  It is more likely we misinterpret the itinerary as wanderings, because we are unable to place the references precisely.
We also need to understand ecology, not only geography. The Israelites had flocks in the wilderness, and thus were in the same situation as their own ancestors, the Patriarchs. Those generations were semi-nomads. Unlike true nomads, they remained in a defined circuit. They went where grassland and water were seasonally available, but they knew that they would have to move in time, because the resources were limited.  That looks like wandering to the uninitiated, but in fact, it is a reasonable accommodation to living in a world with limited resources.
Is that not a basic problem for us, today?  What reasonable accommodations are we failing to make, because we refuse to accept that we are living in a world with limited resources?

Illustration: Oyun Musa, an oasis on the southwestern coast of the Sinai, perhaps the Biblical “Elim”
The third overall direction of the Israelites’ itinerary in the Wilderness was towards the next oasis.
Inhospitable though it certainly is, in large part, the Sinai also contains oases, Edens in the middle of the Wasteland. Again: although the Bible criticizes the Israelites for their lack of faith, one can sympathize with the human failing of coming to an oasis and being content to look no further.  According to Exodus 15:27, after their first embittering experiencing, finding the waters of Marah to be non-potable, the Israelites came to Elim, a place of palm trees and abundant fresh water. And was that not a place of healing?
Unlike the first two directions, this is not bad in the short run,.  But it leads nowhere, so it is not good forever.
And what about us? Are we content with pushing back the Wilderness just so far? We got rid of the statues of some notorious racists. Have we defeated racism? We have some 50-year-old legislation promoting clean water, so the Ohio river no longer catches fire. Has this solved the problem of environmental degradation? Or, in fact, are the problems, overall, even more urgent today?
Savor your accomplishments. But don’t think them as ultimate.  Savor the oasis. But don’t confuse it for the Promised Land. 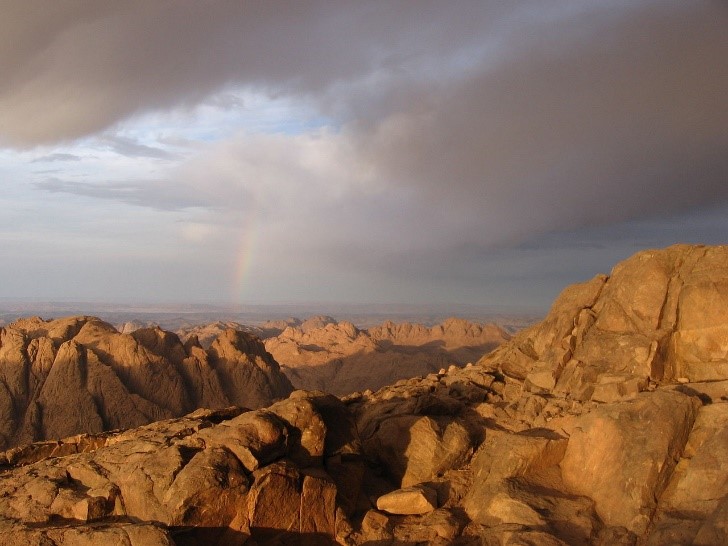 Illustration: Jebel Musa, popularly identified as Mount Sinai
To look beyond the next oasis, you need two sources of illumination.  These are the final two directions of the Israelites’ journeying in the Sinai, the fourth and fifth of their directions.
The fourth direction was towards Mt. Sinai.  This was the overall goal of the first two and a half months of the post-slavery history of our people.
Why did the Israelites have to go to Mt. Sinai? Why not head straight for the Promised Land? Because God’s reason for freeing the Israelites was not simply to right the wrong of slavery.  God’s longer-range reason in freeing the Israelites was to get them to accept the Torah. Mitzrayim represented “a house of slaves,” as the Ten Commandments expresses it-- an entire state built upon slavery. The Torah is the antidote to that poison. The Torah is a blueprint for a just society, a constitution for “a kingdom of priests and a holy nation.” The Torah envisions a society in which people stand equal before God. It calls for a society in which the fortunate and prosperous will remember their lowly origins and be generous to those in need.
The quasi-historical narratives of the Torah and its laws function together to amplify this call for justice and compassion. The narratives build in reminders of our frequent failures, in order to curb our tendency to arrogance, and therefore, to promote our humanitarian impulses. The laws create behavioral norms with societal authority, to create a basement of behavior beneath which we dare not fall.
How are we doing, with respect to building our societies on that blueprint? Who doesn’t realize that we could be doing so much better? 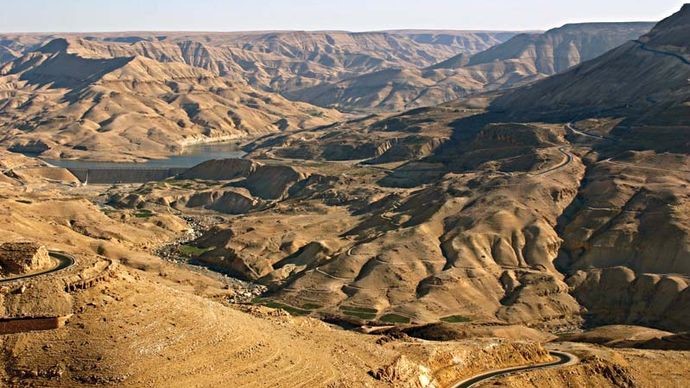 Illustration: The Jordan River valley, historic eastern boundary of the Land of Israel
As important as was the journey to Sinai, most of the narrative in the Book of Numbers is devoted to journeying in another direction. That is the direction, from Sinai towards the Land of Israel.  As God says, “Long enough have you stayed at this mountain. Turn and journey onward…” (Deuteronomy 1: 6),
That is the ultimate direction. Appropriately, the Israelites had not yet reached it at the end of the Book of Numbers, and not even by the end of the Pentateuch.  They only entered the Land of Israel in the Book of Joshua.  They were exiled from the land again at the end of the Book of Kings but began to return at the very end of the Biblical process, in the Book of Ezra.
The pattern has continued to define the Jewish soul: exile, longing, keeping steadfast to our identity, including the yearning to return, and then actually returning. We have had our independent State of Israel for three quarters of a century, and even today, it needs to face enemies bent on its destruction. Much of the world has no sympathy for Israel’s struggle, but we dare not tire of the effort to defend the Promised Land—even if and when we criticize its policy makers, reminding them to keep Israel the Land of Promise.
For our contemporary generation, another nuance is also important: Are we moving closer to a Promised World, or are we backsliding? Swords, not plowshares, are the implements of the wicked, and good people need swords for defense. This is a sad necessity, but by no means an ideal. We need to do better.