TCHAD GADYA: NOT JUST FOR PASSOVER 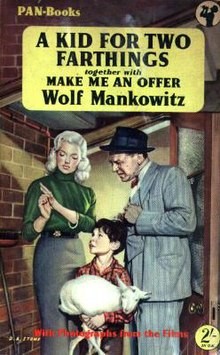 Illustration: Wolf Mankowitz, A Kid for Two Farthings. The 1953 novel, about an impoverished Jewish boy mistaking a kid for a unicorn, was the basis for the 1955 film of the same name.

If you were to ask a group of Jewish people, reasonably informed as to our traditions, to identify which Jewish holiday references a kid (i.e., a baby goat), you would certainly receive the answer, “Passover.”  The table song, “Chad Gadya-- One kid,” is sung at the end of the home holiday gathering even among families abbreviating the seder liturgy.
But there is another, hidden answer: Shavuot.  The connection between the kid and Shavuot is the custom of having dairy meals on that holiday.
The source of the custom is shrouded.  Neither the Bible nor the Talmud refers to it. It is first mentioned in Ashkenazic rabbinic literature, in the 14th century “Book of Customs” (Sefer HaMinhagim) of Rabbi Isaac Tyrnau, and an explanation is first attempted in the commentary of the Ashkenazic rabbi, Moses Isserles, to the lawcode, Shulchan Arukh, in 1564. However, absence of evidence is not evidence of absence.  In general, the practice of publishing lists of Jewish customs began only in the later Middle Ages. But that is a literary development, not a sign that those customs were innovations of that era. We don’t know how old the custom was. I suspect that it goes back to Biblical times, for the following reason: 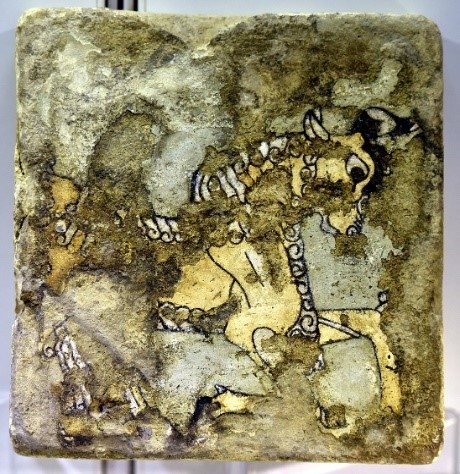 Illustration: Glazed brick depicting a wild goat. Iraq, 9th-7th centuries, BCE. Iraq Museum
Most Jews today are city slickers, and don’t typically know about the life cycle of the goat, but our biblical ancestors were intimate with the following facts of life: “Most feral goats and goats raised under natural conditions begin weaning their offspring at around 3 to 5 months of age.... Many goat keepers separate kids from their dams at around 10 to 14 weeks.” (Sue Weaver, The Goat)
Since the bucks and the does mate in the Autumn, and gestation is about 150 days, the kids are born in the early Spring. Therefore, at Passover, the milk of the mother is not yet available for human consumption, since the kids are wholly dependent on it.  But by Shavuot, seven weeks later, the kids are beginning to browse, although the dams are continuing to lactate.  Therefore, Shavuot is the festival when the goat milk may be harvested without harm to the kid. 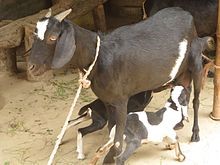 Illustration: A goat dam nursing two kids.
This information is cool, to be sure; but what should we do with it? The answer may be summarized in one word: sustainability. Our ancestors understood that you cannot long survive if you kill off your resources.  That’s the message of waiting until Shavuot before taking the mother’s milk for human use.  But we are in danger of forgetting that elementary wisdom. We are overfishing, overgrazing, overtaxing the land, water and air that keep us alive.
Much of the habitat degradation that we are causing is connected to our over-consumption of animal products.  Take heed to the Union of Concerned Scientists, “Livestock production is a major cause of climate change and in most parts of the world, people already consume more animal-sourced food than is healthy. But even small dietary shifts can have a positive impact. The average person consumes 100 grams of meat daily. Reducing that by 10 grams could improve human health while reducing greenhouse gas emissions.”
In the last election cycle, one of the skirmishes in our culture war was the canard that the environmentalists were going to outlaw burgers. Let’s try to stop imposing the partisan grid on every statement about the imperiled future of our planet. The choice is not between TVP burgers and bootleg burgers. A few impossible burgers can help make the other burgers less irresponsible.
We could also improve the ability of the grasslands that feed our cattle to capture carbon and therefore offset some of the global warming resulting from our beef addition. Marcia DeLonge, senior scientist in the Food & Environment Program at the Union of Concerned Scientists, gives advice that ought to be more widely known: Since trees sequester significant amounts of carbon while they are growing and release them only slowly when they die and decompose, we should be reforesting, not deforesting, our lands. This includes ranchland. We should use our power as consumers to motivate ranchers to expand the practice of “silvopasture”, planting trees in borders around fields and integrating trees into crop and grazing systems.

Illustration: Cattle grazing in an area into which trees have been introduced. Credit: Union of Concerned Scientists.
To bring this back to Shavuot: Of course, the holiday is not only about caprese salad, calzones and cheesecake rather than kishke, chicken soup and cutlets, blintzes rather than brisket. It’s about Torah. The Torah is a blueprint for how to live a meaningful life.  Now, the absolute foundation of a meaningful life is the ability to live for tomorrow, not only today; and that means, to live in a sustainable world.
At the end of the Chad Gadya, God banishes the Angel of Death, who has slaughtered the slaughterer, who slaughtered the ox. In today’s out-of-balance world, we are too much a species of slaughterers, and our false God is too much the Angel of Death. Let’s bring God back. When we lift the kiddush cup at the Shavuot table, and we say, “l’chayyim”—“to life”—let’s make that a reality. Amen.