The Refugee is a Sibling, not a Stranger

In addition to death and devastation, the Russian invasion of Ukraine has also displaced millions of Ukrainians. Approximately six million civilians have fled the attack on their homes to neighboring countries: Poland, Slovakia, Hungary, Romania and Moldova—and the number of refugees continues to rise.
Israel, too, has taken in refugees uprooted as a result of this crisis.   As the world’s only Jewish State, Israel exists to shelter Jews exposed to the murderous whims of the countries of the Exile. As of a month ago, tens of thousands of Ukrainians had arrived in Israel.
Next week, I will be sharing some thoughts about Israel’s role in this crisis. There are some tensions that we will need to explore. For now, I will remind us of the historic role that Israel has played in saving Jewish refugees.  From its very first months of independence, and then again and again, over the past three quarters of a century, Israel has been the sanctuary for Jews in distress.
The roll call of geographical regions and political states where Jews were endangered, and Israel was the rescuer, spans three continents.  From Holocaust survivors leaving the charnel house of Europe, to Jews in Arab lands attacked in response to the emergence of Israel as the independent Jewish state, to Jews in the Soviet Union and its satellites persecuted during the Cold War, to Ethiopia’s historic Jewish community imperiled during the decades of civil strife in that country, to French Jews increasingly targeted by Islamist terrorism in recent years, Jewish refugees have found safety and opportunity in Israel.
Each country’s story has its unique features. Without any disparagement of the saga of Jews who fled persecution in Iran, Iraq, Syria, Egypt, Libya, Tunisia and Algeria, let us look closely at the story of Israel’s rescue of one Jewish community within the Arab world: the Jews of Yemen.
Jews had lived in Yemen for over 2,000 years, and perhaps even since Biblical times. They remained loyal to ancestral traditions, and in some respects, were the Jewish community most closely bound to the original language and folkways of Judaism. They persevered in their Jewish fidelity through repeated bouts of persecution in the past millennium. Several waves of Yemenite Jews emigrated to Israel between the 1880’s and the 1910’s, but there were still 50,000 Jews in Yemen when the Partition of Palestine was approved by the United Nations in November 1947.
That inaugurated the most perilous chapter in Yemenite Jewish history. Angry about the U.N. vote, Arab Muslim rioters staged a pogrom in Aden. With collusion of the local police, the rioters murdered 82 Jews and destroyed most of the homes and businesses of the Jewish community.  Further looting imperiled the community in 1948 after a revival of the odious “blood libel,” the baseless charge that Jews committed a ritual murder of two Arab girls.
Fearful that the Jews of Yemen would be slaughtered, the new State of Israel mounted a rescue operation. It is known as “Operation Magic Carpet.” The Joint Distribution Committee, an international Jewish relief organization, helped organize transit points in Aden. Yemen’s Jews endured great hardship, sometimes literally trekking across the desert to get to those transit points. Between June 1949 and September 1950, Israel used chartered British and American transport planes to make 380 flights from Aden to Lod airport. Although the planes were sporadically attacked, and the desert conditions made airplane engine maintenance a herculean task, the program successfully airlifted the great majority of Yemenite Jews to the new country. 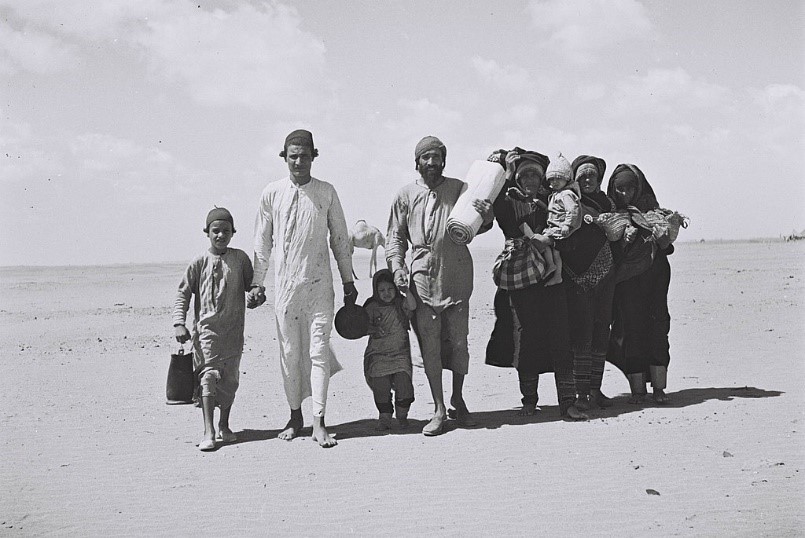 A Yemenite family walking through the desert to a reception camp set up by the Joint Distribution Committee near Aden. November 1, 1949
The Jews being rescued had never been in an airplane.  Steeped in the Bible as their community had been, it is not surprising that some of them associated the airplane with the verse in Exodus 19, in which God tells the Israelites that they are being borne upon eagles’ wings and brought to Mt. Sinai, with the expectation of continuing on to the Holy Land. Of course, for the travelers, taken completely beyond their universe of plausible expectations, exhilaration and relief had to contend with exhaustion and fear of the unknown. 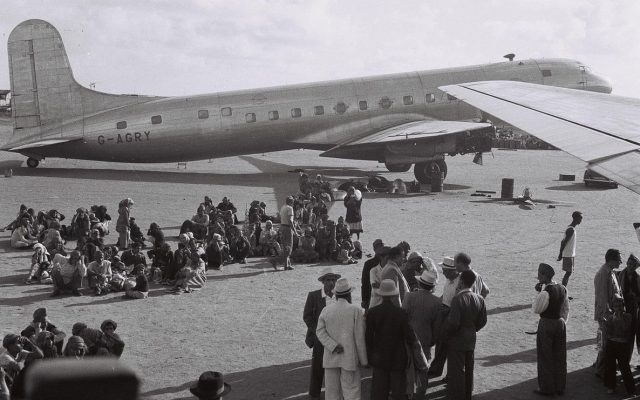 Yemenite Jews waiting to board a rescue flight, Nov. 1, 1949.
The rescue mission was certainly not flawless.  Hundreds of Jews died going to the transit camps and waiting there.  The local Arab leadership was essentially holding the Jews hostage for ransom, and the Imam of Yemen, the British authorities, and the Joint Distribution Committee all have blemished records. But the main story is that Israel rescued 47,000 Jews from Yemen and an additional 4,000 from Djibouti, Eritrea and Saudi Arabia. 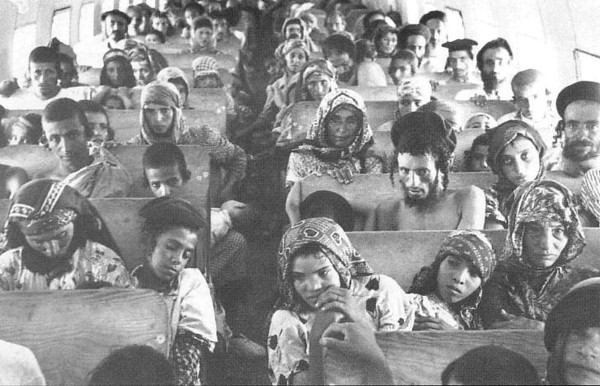 Illustration: Yemenite Jews aboard one of the chartered Alaska Airlines airplanes.
Israel had no permanent housing for the new arrivals. The need to save them was urgent; it could not wait upon construction of housing. Israel moved the new arrivals to areas of the country where it needed settlers, to prevent the infiltration of Arab terrorists through sparsely settled regions.  Yemenites took an active role in the defense of the infant country. 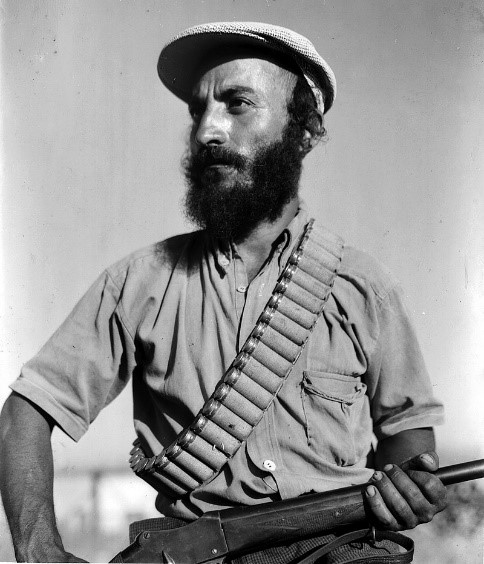 Yemenite Haganah member on guard duty at moshav Elyashiv
At first, Israel housed the Yemenite Jews in tent cities. Then it built “ma’abarot” --transitional housing. In those rude conditions, the immigrant community suffered high infant mortality rates.
Again, Israel’s record deserves critical scrutiny. It was guilty of a paternalistic attitude towards the community. But the main picture is of a new state, with few resources, opening its gates to far more refugees, per capita, than any other nation has done.  The criticisms, while justified, ought to be tempered by the realization of how dire was the threat to Israel’s survival. 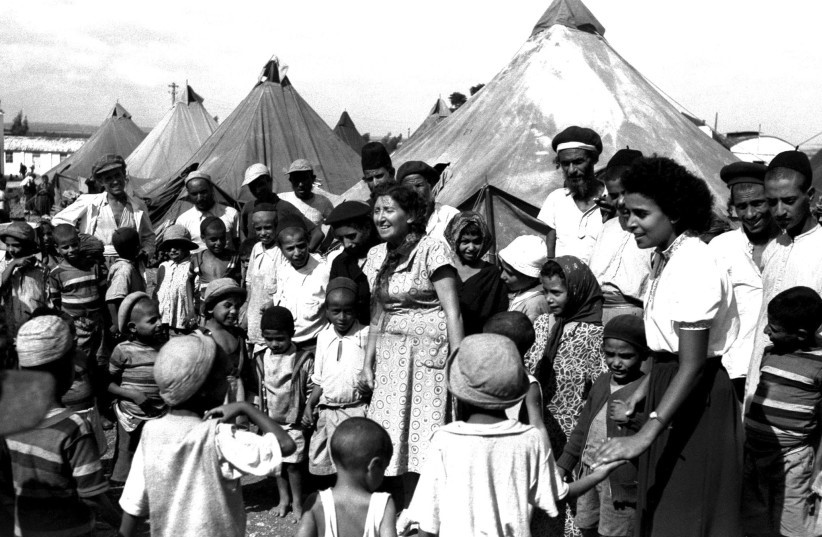 Yemenite Jews near their tents in Israel in 1949. (credit: REUTERS)
Our beloved former hazzan, Yitzhak Danker—of blessed memory—worked for the National Health Service of Israel during the early years of the State.  He told me vignettes of his work with the families of the Yemenite community. They were unfamiliar with modern technology, with indoor plumbing, with the scientific default knowledge that we typically take for granted. But he never shared any of his stories to cast aspersions on the people he served.  He knew that the task of helping them adjust to the modern world was sacred work, and he approached it as a mitzvah.
In recent years, Israelis have demanded a reckoning from the government concerning the mistakes and even the scandals of the rescue program in its early years.  Israeli society has matured. In so doing, it has abandoned the “melting pot” ideology of its early years, in which the members of Middle Eastern communities were expected to give up their cultural distinctiveness in order to adopt an Israeli identity. Israel, like America, is more open to multi-culturalism today.
Yemenite-descended Israelis have successfully entered the mainstream in commerce and political life. Some have achieved celebrity status in Israel.   Ofra Haza was hailed as one of the finest pop singers of her generation, and Avigdor Kahalani was a bona fide war hero of the Six Day War and especially the Yom Kippur War—where he played a pivotal role in preventing the attacking Syrians from overrunning the entire Israeli defensive position on the Golan Heights. 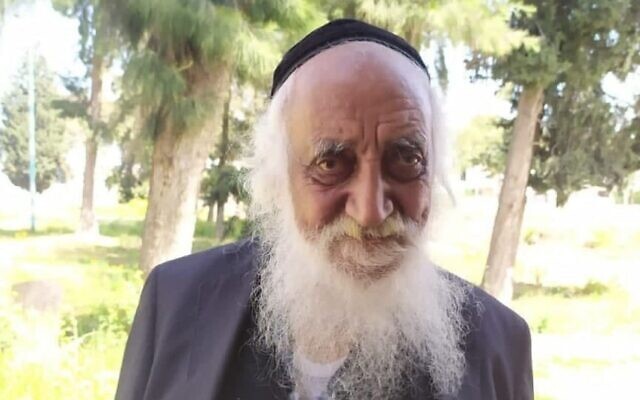 Yaish Giat, a Yemen-born Mori and spice shop owner, torchbearer for Israel's 73rd Independence Day Ceremony.
A sign of Israel’s maturation: Last year, one of the torchbearers of the annual Independence Day torch lighting was a 102-year-old Yemenite-born spice-shop owner and religious educator, Yaish Giat. The theme of the 2021 ceremony was honoring the Jews of Yemen, who have contributed so much to the State of Israel.
The lesson to be learned is that the refugee is not only a person in need, competing with the native born who are in need in different ways. The refugee is you, only with different circumstances of where and when he lives. The refugee is also likely to be part of the village that it takes to raise the next generation of all of our children.  The refugee is the bearer of a cultural diversity that will enrich us all, if only we have the courage and the vision overcome our fears and our xenophobia.  The refugee is likely to be the parent or grandparent of one of our leaders of tomorrow.
The lesson to be learned for Jews is more pointed.  The Jewish refugee could be you or me, because it is already our cousin, as it was our uncles and aunts and grandparents in previous generations.  We are all responsible for each other.  When Israel was young and poor in resources, it found a way.  We, who have so much more to share, must not fail to fulfill the mitzvah: to love our neighbor as ourselves.