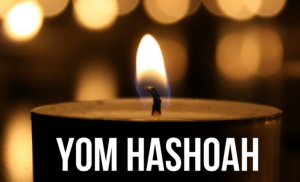 A half-truth is quite effective in service of a lie. This is going on now in the Russia- Ukraine conflict. Russia’s dictator, Putin, has declared that the goal of the Russian “special operation,” as he euphemistically disguises the invasion, is to rid Ukraine of Nazi influence. In fact, his goal is to destroy or subjugate a state that Russia has historically sought to dominate, and to prevent that state from aligning itself with Europe and the West. But what of the claim, that Russia’s incursion is to rid Ukraine of Nazi influence?

This is where the half-truth enters. We who regard Ukraine as the victim of Russian aggression need to be honest about the checkered history of the smaller country. It has harbored White nationalist and neo-Nazi sympathizers in the past, and some of them are still to be found. Antisemitism is at the heart of the repeated vandalism of the Babi Yar memorial since 2006. A US State Department report on human rights certified that Ukrainian nationalists committed antisemitic vandalism and demonstrations in 2016. On May 3, 2018, Right-wing Ukrainian nationalists marched to honor locals who had joined the Nazi Waffen SS during World War II. Officials of the Ukrainian government as high up as the chief military prosecutor have espoused anti-Semitic conspiracy theories in public statements, with no official reprimand.

In particular, the Azov Battalion, a semi-autonomous fighting force formed in 2014 with the support of Ukraine’s Ministry of Defense, has been home to White-power extremists. It gained a heroic status among Ukrainians for its role in recapturing Mariupol in June 2014 from Russian-backed forces. This status has shielded it from loss of support over its adoption of neo-Nazi insignia and its role in international far-right networking. Among other reprehensible acts, the militia is guilty of having attacked and destroyed a Romani camp in Kyiv in 2018.

But the Azov Battalion is not the sum and substance of Ukraine’s resistance to being invaded and dominated by Russia. The Azov Battalion has been integrated into the Ukrainian National Guard, whose commander in chief is the President of Ukraine—as is widely known today, a Jewish man.,

Most Ukrainians do not share the White supremacism of the nationalist elements in the Azov fighting group. The political wing of the Azov movement won only 2.15% of the vote in the last elections in Ukraine, in 2019.

Let us, rather, ask ourselves this question: who, in the Russia-Ukraine war is behaving in a Nazi-type manner today?

My answer to this question is, Russia. I could point to its own record of harboring right-wing nationalist groups, as much as presence in Russia as in Ukraine. But what especially leads me to this sober conclusion is Russia’s deliberate targeting of civilians. Its behavior is the behavior is a technologically updated parallel to the tactics of the Luftwaffe in The Second World War, deliberately shelling, bombing and rocketing civilian concentrations. Following the Nazi example, Russia is targeting purely civilian spaces and concentrations. This is state-sponsored terrorism. If there was any doubt about that, the answer ought to have been decisive to anyone thinking critically after the Russian attack on the Kramatorsk train station on April 8. 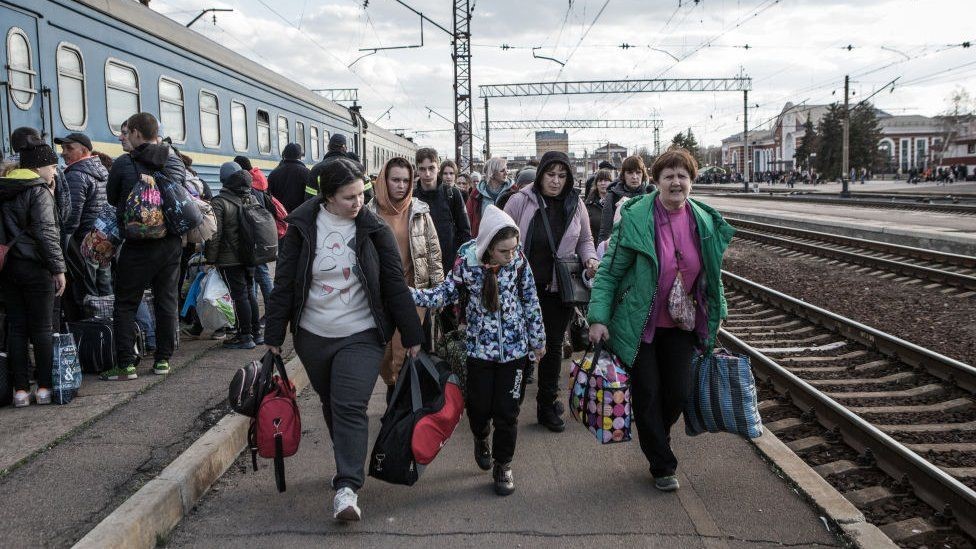 For the balance of this essay, I will develop this point with reference to my own family history.

My in-laws, Morris and Sophie Salzer, and their infant daughter, June, were caught up by the Nazi invasion of Poland in 1939. Morris was nearly killed in a random act of violence, a Nazi soldier on the streets of Lodz firing into a group of Jewish men for sport. All the men dropped to the ground. Some were dead, and some feigning death, like Morris. Morris waited until the soldier left the scene, extricated himself, and went home. Sophie told him that he must flee immediately. It was still possible for people to get across the border to Soviet-occupied Poland, and Morris and Sophie agreed that he would wait for her in Stanislawow, just inside the Soviet zone. She would wait until their infant daughter was older, to increase the likelihood of surviving the brutal Polish winter.

Sophie and baby June managed to leave the Lodz ghetto in April 1940, just before the Nazis walled it off from the outside world. Employing a pre-war non-Jewish business partner to pose as her husband, and deploying her sass, her “non-Jewish” appearance, and her unaccented Polish, Sophie succeeded in crossing the border into Stanislawow—which the Soviets had renamed Ivano-Frankovsk. (Today, it is known in the Ukrainian pronunciation, Ivano-Frankivsk.) Morris—who had begun his medical training in Prague, a decade earlier-- was working for the Soviet medical establishment, and they lived quietly for 13 months, until the Nazi invasion of the USSR, June 22, 1941. 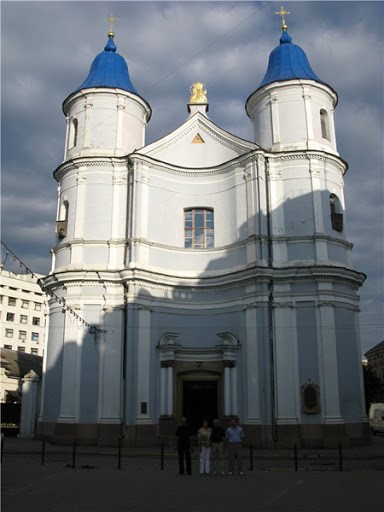 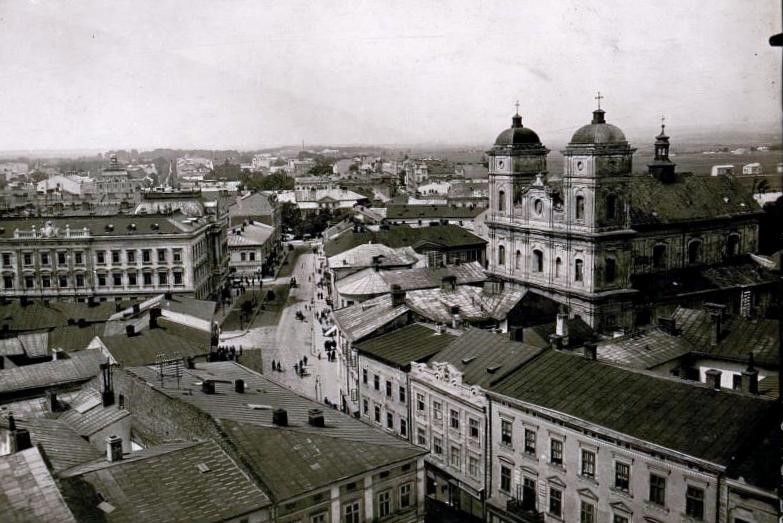 As soon as they became aware of the invasion, they fled to the train station, eager to go as far to the East, as far away from the fighting, as possible.

Illustration: The train station of Stanislawow, as it appeared in the late nineteenth century, before the station was electrified. Credit: Wikipedia, “Ivano-Frankivsk Railway Station”

But they almost died on the spot. A Luftwaffe dive bomber flew over the train station and dropped its bomb. There were two trains, one on either side of the platform. Morris, Sophie and June were in one of them. The bomb destroyed the other one. Their train pulled out. They stayed on it as long as they could, only getting off in Alma-Ata (today, Almaty), Kazakhstan.

Seeing the reports of the 50-plus murdered civilians in the train station of Kramatorsk, with twice and many wounded, and who knows how many hundreds or thousands psychologically scarred, I identified them with the victims of the train bombing that so very nearly cost my in-laws their lives. 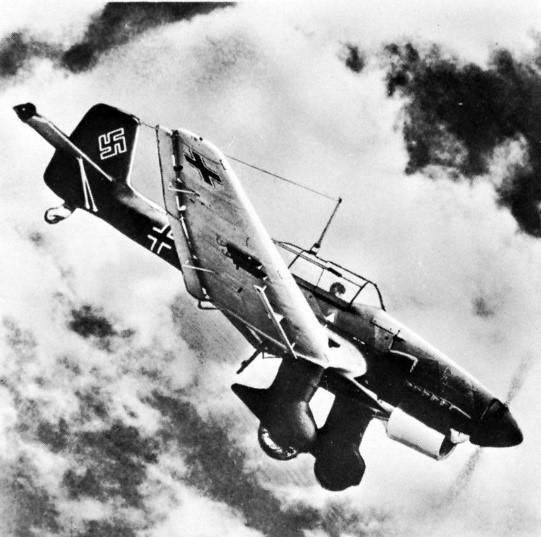 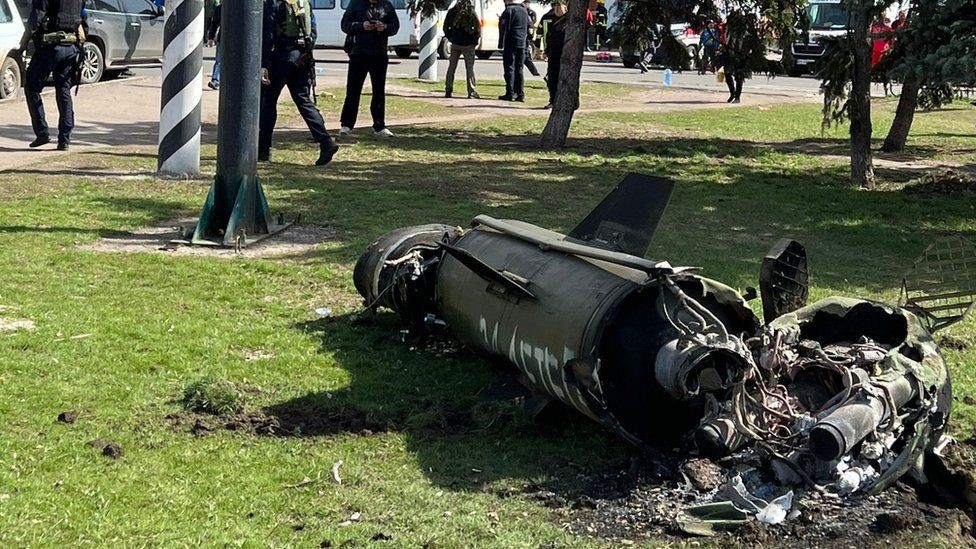 Illustrations: (L) German Ju-87 “Stuka” dive-bomber. This is likely the type of airplane that attacked the train station in Stanislawow (now Ivano-Frankivsk) on June 22, 1941. (R) remains of a Russian rocket used to attack the Kramatorsk, Ukraine, train station on April 8, 2022.

Tonight, the Jewish world, and many of our Gentile well-wishers, observe Yom Ha-Shoah V’ha-G’vurah. As we honor the memory of the victims of Nazism, we should also do what we can to help a people struggling to liberate itself from the Neo-Nazi elements of its past and to defend itself against a Nazi-type aggression.