Pray for the Peace of Jerusalem, Even from Aggressors in our own Midst 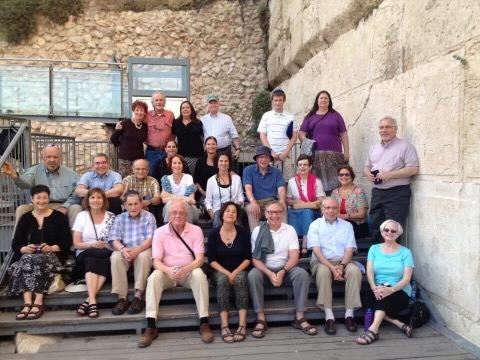 Over the past year and a half, we have often had occasion to ponder the news of the day, both good and bad, in the light of our spiritual values. At this time, I have some sad news to share with you: news of Jewish men and women, assembled peacefully to pray, being assaulted by other Jews. It seems like lurid fiction. But it actually happened.

Some of you who are listening to me have traveled with me to Israel. We have worshiped together at a particular place in Jerusalem, along the southern extremity of the kotel. The kotel is the Western Wall of the Temple compound, and the only surviving part of the Jerusalem Temple complex. This particular section of the kotel is at the level of the ancient street, beneath an architectural element high up in the wall known as Robinson’s Arch. It was long concealed, but it was unearthed in the course of the archaeological excavations at the kotel carried out since 1967. It is not part of the traditional kotel, familiar to most of us as an Orthodox-dominated worship space, with its physical barrier dividing men from women. This recently excavated space has been reserved for egalitarian worship. The access to that worship area for our open-minded and tolerant brand of Judaism has been upheld by Israel’s Supreme Court.

But last Saturday night, when our Reform and Masorti brothers and sisters were worshiping at the Robinson’s Arch prayer space, commemorating the Fall of the Temple on the 9th of Av, 1951 years ago, a band of vigilante fanatics invaded that space, assaulted and reviled our worshipers, and forcibly set up a mechizah. The police did not react to protect us.

Let me share with you a statement by two leaders of our movement, Rabbis Jacob Blumenthal and Ashira Konigsburg. I will add that you will have the opportunity to hear from Rabbi Konigsburg in another week, on the night of August 1, when she will be the guest at our monthly special conversation.

Here is Rabbi Blumenthal’s statement, posted this past Sunday: “The events of the night of Tisha B’Av are just the latest example of the despicable behavior of some fanatics against other Jews. The rabbis assigned this day on the Jewish calendar to warn against sinat hinam, baseless hatred, yet this is how some act against their Jewish siblings. We call on all in the Jewish world, and particularly Israeli governmental leaders, to denounce this behavior and affirm the right of all to practice Judaism according to their traditions and conscience throughout Israel, including at the Kotel. We call on the new coalition government to quickly fulfill its promise in their coalition agreement to carry out the Kotel Agreement that has been stalled for years. The Masorti-Conservative movement affirms Ahavat Yisrael, a love for all Jews, and expects others to do so as well, particularly as we mourn and commemorate our shared history of destruction and suffering.”

Rabbi Konigsburg added: “We are appalled. And yet we are also grateful to [Minister] Nachman Shai for his support via Facebook and glad MKs Kariv and Tal were there. It all shows the urgency of the need to implement the kotel agreement, as if there were any question.”

By way of explanation: More than a dozen leaders of the Conservative movement in the U.S. joined their Masorti Israeli colleagues last week and met with new Israeli President Isaac Herzog, with four government ministers and half-a-dozen members of Knesset.

Rabbis Blumenthal and Konigsburg mentioned the “kotel agreement.” This was an agreement reached by the Israeli government in 2016, after three years of painstaking negotiations. But the Netanyahu government subsequently reneged on its promise to implement the agreement. I agree with my colleagues: With a new government in place, it is time to allow non-fundamentalist Jews access to at least some small portion of the holiest site in Judaism.

It is sad to reflect that the addiction to violence, an addiction that has fueled the unremitting assaults on Israel by some of its neighbors since the day of its birth in 1948, seems to have done damage to at least some of the Israeli national psyche. Addicted to violence, some Jews who profess to be strict followers of our tradition have come to believe that the violence they are perpetrating is somehow pleasing to God. That is barbarism. It is reminiscent of the obscene religious thinking of the pre-modern wars of religion pitting Protestant against Catholic and the ongoing war between Shi’ite and Sunni Muslims. Any God recognizable to us is surely saying about the violence masquerading as Orthodox Jewish observance what the prophet Isaiah already preached, 2700 years ago, in words that we chanted just last Saturday morning:

Trample my courts no more…
Assemblies with iniquity, I cannot abide.

Friends, this coming Sabbath is known as “The Sabbath of Consolation.” I pray that consolation will come in the form of the maturation of the human spirit, so that our own Jewish people can become free of the poison of gratuitous hatred of any fellow Jew who dares to worship God in peace in some way different from one’s own preference. To see a gathering of men and women at Robinson’s Arch prayer plaza, pouring out their prayers before the One God, without fearing for their safety: that would be a fitting consolation.