WHAT DO YOU PUT ON A SUDDENLY EMPTY PEDESTAL?
The Jewish Answer that Could Heal America 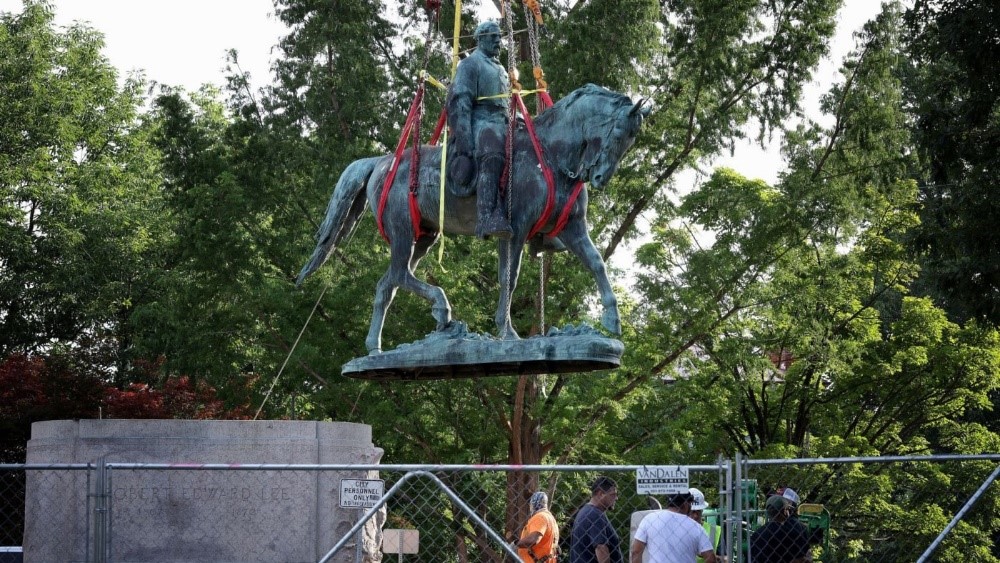 This week, we observe a strange convergence of past and present. This coming Saturday night, we will gather, as we have done for 1,950 years, to mourn the destruction of our unique Jerusalem Temple. That anniversary will come one short week after the removal of the statues of two Confederate generals from the public park in Charlottesville, Va.

On the surface, these events are quite dissimilar. The Roman armies’ destruction of the Temple, a disaster in itself, was also accompanied by a massive enslavement of Jewish prisoners of war. So many Jews were captured and auctioned that contemporary slave-traders complained of the glut on the market. By contrast, however the “Lost Cause” apologists tried to prettify their subject, Generals Lee and Jackson were fighting to preserve a slave-owning society. The destruction of the Jerusalem Temple was a sad landmark in the annals of enslavement, whereas the defeat of the Confederacy was a step forward, however partial and incomplete, towards the wider enjoyment of freedom.

Beneath the surface dissimilarity, however, we find an intriguing parallel. What happens when a symbol is removed?

For Judaism, the loss of a unique central sanctuary in the year 70 proved to be a decisive moment in the history of the synagogue. There had been synagogues before 70, both in the Jewish Diaspora and in the Land of Israel. While evidence is unfortunately incomplete, we know of synagogues in Jewish communities in Egypt, functioning a place of public worship, as early as 2200 years ago. We also have records of the synagogue in Israel, 2000 years ago, serving as a place where the Torah was publicly read and expounded. It was also a gathering place, as is shown by its Hebrew name, Beyt K’nesset, meaning “house of assembly.” But the synagogue of that era was at most an outer outpost of religious life. It was built to face the Temple, and in its functioning, it respected the prerogatives of the Temple as the sole sanctuary devoted to biblical-style sacrificial worship, conducted by men of priestly descent. The Temple was the center of the Jewish world.

After 70, in a Jewish world that had lost its center, the synagogue developed along with a new era in our religion. Religious life changed fundamentally for our ancestors when the Temple was destroyed. The new synagogues, liberally dotting the landscape of Jewish settlement in the Galilee, the Golan and the Diaspora, did not replicate what happened in the Jerusalem Temple. They served as the locales for a radical reorientation of Jewish religious life.

What changed in this new world of synagogue Judaism? First, egalitarianism replaced dynasty. The poorest of the poor could and did rise to eminence as great rabbis, with no claim of descent from Aaron the High Priest, no lineage to lean on. Second, in place of the smoke of sacred barbecue, the air of the synagogue was filled with words—words of prayer, quoted words of Torah, ever-changing words of interpretation. Third, whereas, in the minds of pilgrims and pious Jews worldwide, the Temple symbolized God’s promise fulfilled, the synagogue existed in a mental construct of an imperfect world. Among the words chanted fervently in the synagogue were the musaf prayers for Shabbat and holidays, petitioning God to send the Messiah and rebuild the Temple. The synagogue was frankly provisional. For the present, however, and as long as the present might last, the synagogue would keep Judaism healthy, and Jews, solidly embraced by the still-and-always-relevant covenant with God.

The synagogue of the post-70 era would be more or less familiar to us today, whereas we would feel as if we were visiting some other religion, were we to travel in a time machine and observe the Jerusalem Temple service. The reorientation of Jewish life that was accomplished in and through the synagogue is still with us.

The lesson of Tisha B’Av, of the destruction of the Temple, for our fractured American body politic of 2021, should emerge from this analysis of the rise of the synagogue:

The empty pedestals, relieved of the 6 tons of statue, await new statuary, new symbols. The statues were monuments to a blighted version of America, in which the accident of birth could trump the soaring rhetoric of our visionary founders. “We hold these truths to be self-evident, that all men are created equal”—this is our country at its best. But it did not live up to the best, not in 1776, when the framers of the Declaration of Independence themselves held men and women in bondage, not in 1877, when Federal troops retreated from the South and allowed the KKK and the Jim Crow codes to subvert the progress of democracy, and not in recent times, with the weakening of the legislative and judicial accomplishments of the Civil Rights era.

Yes, our history has seen tides and counter-tides. The removal of the symbols of the glorification of enslavement, a week ago, are a moment of forward progress. Now it remains to be seen, what will be put on the suddenly empty pedestals, both literally and figuratively. In 2017, when the statue of Robert E. Lee came down in Baltimore, some activists erected a sculpture of a pregnant African American woman on that pedestal. Their action was extra-legal, as was the vandalism that brought their statue down within days. Neither that action nor the counter-action are a good model for what we, as Americans, need to do now.

We need to embrace the true potential of our national slogan, e pluribus unum, “out of the many, one.” We need to believe in and work for an America that transcends identity politics, where the content of one’s character truly counts for more than the color of one’s skin, the language of one’s faith, the private choices that are between our conscience and our Creator.

America has an opportunity, even in polarized times such as 2021. The “better angels of our nature” are never absent. We can summon them and let them guide us. Jews did that, nearly two millennia ago. America: cultivate the goodness to do that today.