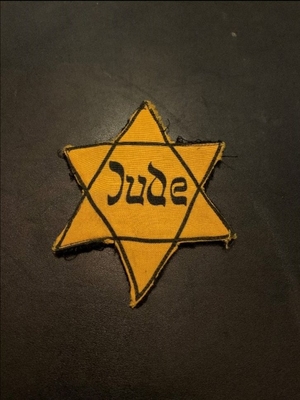 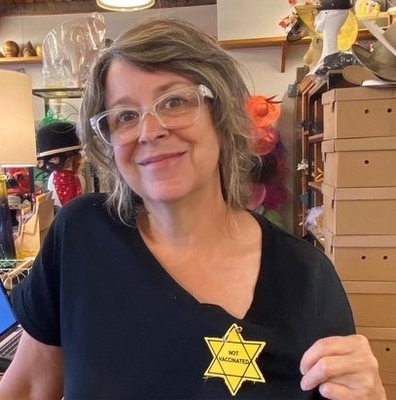 The recent mouthing-off of Representative Marjorie Taylor Greene, in which she compared the mandate to take public health precautions with the Nazis’ regulation, forcing their Jewish victims to wearing the Star of David badge, ought to anger every Jew alive. For me, as perhaps for many of you, this is personal:

Throughout my childhood, we would have guests at our Passover seder. Some came for one year or two, while others were welcome presences at the seder from year to year. One of our regular participants was Marianne Lehmann, of blessed memory. She was a quiet, cultured lady, who spoke English with a soft, European accent. She did not insert herself in our often-spirited conversations. As children, we knew that she had lost most of her family in the Holocaust, and that we were honored to be her surrogate family for the holidays.

The Passover after I began my rabbinical studies (1978), Marianne gave me an envelope. Opening it, I saw a fabric Star of David, with the German word for “Jew” written in it. (It is the badge illustrated above.) She said to me, “Michael, I have no family to whom I would pass this along. I know that you will be devoting your life to Jewish education; and so, I charge you to use this to teach your students about the Holocaust.” I took the gift and made a solemn promise to put it to the use she requested; and Sheila and I have done so, in our teaching, for these four-decades plus.

That is a “real Jewish star” in a particular sense. Evil people—the Nazis, their willing executioners, and their collaborators of many nationalities-- used that device to single out Jews, so as to facilitate the oppression and, ultimately, the elimination of the Jewish people.

One might be tempted to shrug off the comparison as the loony ravings of an extremist—for after all, Rep. Greene is the lady who fantasized about Jews starting forest fires in California as a profit-making scheme, using their private stock of space-borne lasers. But calling her crazy gives her too much of a pass. It is irresponsible to laugh at anti-Semitism coming from the mouth of an elected representative in the United States Congress. This is worse than stupid. This is evil.

We have only recently observed the Memorial Day holiday. Some 200,000 Americans died as part of the struggle in World War II against the Nazis. It was a desperate struggle against an implacable and all-too-skillful enemy. They died to rid the world of Nazism. They did not die so that three quarters of a century later, bigots masking the ugliness of their souls by draping themselves in flags and co-opting powerful symbols could renew the age-old hatred of the Jew.

Whatever may be your own political persuasion, you have work to do in your own camp to prevent the spread of anti-Semitism. It is not a time to call out the other side’s outrages and be silent about your own allies’ failings. Anti-Semitism is on the march today, from both Left and Right, and of course, from Palestinian and some other Arab quarters.

For the sake of the martyrs, that those who killed them not enjoy a posthumous victory;

For our own sakes, that we do not have to live in terror;

For the sake of our children, that the evils of the past not become the reality of their future;

Let us defend against the normalization of anti-Semitism.

Let us cultivate allies, educate the wavering, and have the strength to confront the Hamans of our generation.

This is the task of our day. In the words of Rabbi Tarfon, we may not complete this task, but we are not free to desist from it.