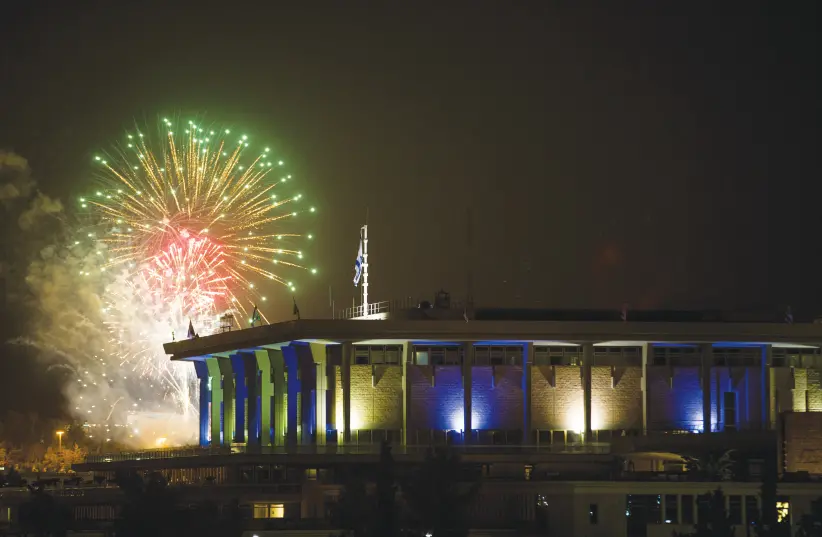 Fireworks over the Israeli Knesset

Reprinted from "The Times of Israel"

Israel's Independence Day: Why we are here, 74 years later

When the going gets rough, we are on the same side. We express our identity as Jews in different ways, but it is the same identity.

Jews all over the world celebrate Israel’s Independence Day– even those who have no intention of ever coming on aliyah, and many of whom have never even visited Israel.

“It’s a kind of insurance policy,” one overseas friend told me. “By supporting Israel financially and emotionally, I know that its sanctuary is available to me or my children or grandchildren, should the need ever arise.”

I find this kind of thinking very sad, because Israel is so much more than a refuge for persecuted Jews. Not every immigrant who has built a life here was escaping from the horror of the Holocaust, the tyranny behind the Iron Curtain or the cruelty of life in an Arab country.

Many of us (the ones Israelis refer to as “Anglo-Saxim”) lowered our standard of living significantly when we settled in Israel, yet found something here that enhanced the quality of life even as we struggled with inflation, mortgages and trying to make minuscule salaries stretch to the end of the month.

We found here a family – our own people. Of course, just like any family, we fight... about religion, politics, the settlements – the fights can be very bitter. Yet at bottom we care about each other and band together when we face a common enemy. We celebrate together and sometimes even have to grieve together.

Basically, when the going gets rough, we are on the same side. We express our identity as Jews in different ways, but it is the same identity.

We found here a beautiful country, unique in the variety of its scenery and climate. Mediterranean beaches banded by azure and indigo water and pure white sand; coral reefs; dense forests; wooded mountains; deserts and rivers and waterfalls; the shimmering mirrored glass of the Dead Sea; fields carpeted with wildflowers – and Jerusalem, the priceless jewel.

Some of us found here a spirituality that we’d never been able to achieve abroad. Anyone who has been in Israel on Yom Kippur, when the whole country comes to a standstill for one day, cannot doubt the kedusha, the holiness, of the Land of Israel. It is intangible, yet it is an undeniable presence.

We found here a pride in the remarkable achievements of this tiny country. We can match, and surpass, the hi-tech of much bigger, richer and better developed nations. We teach agriculture to the world. We are rich in poets, writers, musicians, actors and artists. We can boast of industrial entrepreneurs and brilliant scientists. When any new Israeli invention captures the world’s imagination, somehow we all bask in the reflected glory.

Israelis have always been compared to the Sabra – the cactus with the thorny exterior but the soft heart. We celebrate Independence Day in many ways – campfires and singing, picnics, Bible Quiz, concerts, music and dancing in the streets. We spend the day with family and friends and relish every moment of it.

But it is more than just enjoyment. On every building, the Israeli flag flies. Almost every balcony in every city flies the white flag with the blue Magen David, the Shield of David. And for days beforehand and a week afterward, the flag flies from every car on the road. Every ceremony opens with the singing of “Hatikvah” – the Hope – Israel’s national anthem.

We sing it standing straight and proud, and usually with tears in our eyes as we remember the broken people who found a safe haven here, and those who never managed to reach its shores and died with the dream of Zion in their hearts. And we also remember the brave men and women who gave their lives in all of Israel’s wars, and in the pre-state days, the fighters and pioneers who fashioned this wonderful land that we have inherited.

Shin Shalom, one of Israel’s greatest poets, expressed it for all of us in his “Mother Jerusalem Singing,” which he wrote a day after the Yom Kippur War in 1973:

The writer is the author of 14 books. Her latest novel is Searching for Sarah.