Two articles recently published in the Israeli press regarding the Othodox take-over of the Egalitarian worship space at the Kotel. Rabbi Michael Panitz

A group of religious-Zionist groups are using the egalitarian prayer reserved for non-Orthodox services section for their prayers. 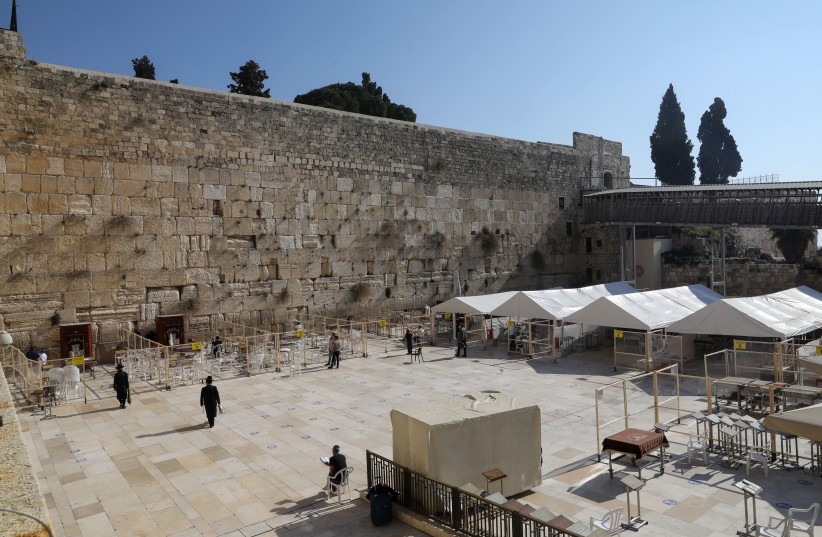 A group of conservative religious-Zionist groups are conducting a series of prayer services and classes this week in the egalitarian prayer section of the Western Wall, despite it being reserved for the use of Masorti (Conservative) and Reform groups.

An organization calling itself the Joint Committee for Preserving the Holiness of the Western Wall gave notice of the prayer services and lessons at the site, situated at the southern end of the wall and outside of the central Western Wall complex.

A mechitza, or gender separation divider, has been set up at the site in opposition to the egalitarian nature of non-Orthodox prayer services.

Both the religious-Zionist group and the Masorti movement have plans to use the site for prayer services and reading of Megillat Eicha (Lamentations) on Saturday night, Tisha Be’av, which could lead to a confrontation there.

Diaspora Affairs Minister Nachman Shai condemned the development and said that the area is the only place non-Orthodox groups have to pray at the Western Wall.

The site, known as the Israel Section, is generally used by the Masorti (Conservative) and Reform movements for prayer services and celebrations and was assigned for such purpose at the beginning of the century by the High Court of Justice.

“At a time in which the government of deception is selling the country to the Reform movements, we are coming and strengthening the grip on the Western Wall,” reads a flyer posted on social media.

On Thursday night, a special late-night prayer service will be held and led by flagship religious-Zionist yeshiva Yeshivat Hakotel, located in the Jewish Quarter of Jerusalem’s Old City, and on Tisha Be’av mass prayer services and lessons will also be held at the site.

Among those participating in the events is also Rabbi Shlomo Aviner, a hardline leader of the conservative wing of the religious-Zionist sector and dean of the Ateret Yerushalayim Yeshiva in the Muslim Quarter of the Old City.

Shai strongly criticized the development on Wednesday, describing it as “baseless hatred.”
“Because of people like this, the Temple was destroyed,” said Shai.

“This is a group of right-wing, religious-nationalist activists who have decided to push aside the Reform movement and do this provocation,” he continued.

The minister said the incident reminded him of the biblical parable of the “prized possession” which the Prophet Nathan used to reprimand King David for having sent the husband of Bathsheba to his death.

“There is no reason to stick their finger in the eye of the Reform movements; they simply want a small corner of the Western Wall in order to have their prayers there, and justly so.”
Representatives 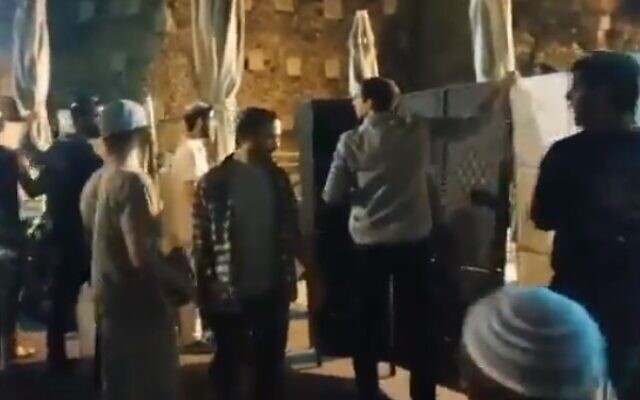 Far-right Orthodox Jewish activists install a partition to segregate men and women at the Western Wall egalitarian prayer plaza in Jerusalem during a Tisha B'Av prayer service on July 17, 2021 (Screencapture/Twitter)

Hundreds of far-right Orthodox Jews overran a prayer service being held by the Conservative Movement at the pluralistic prayer plaza at the Western Wall on Saturday night to mark the fast day of Tisha B’Av, which mourns the destruction of the two Jewish temples that stood on the Temple Mount.

Worshipers were reading from the Book of Lamentations, an annual event at the site to commemorate one of the most sorrowful days in the Jewish calendar. The fast began on Saturday evening and lasts for 25 hours.

The activists, mostly teenagers, entered the site, an area separate from the main Western Wall plaza that has been set aside for pluralistic prayer, cursing and screaming at the worshipers before installing a partition to segregate the area by gender.

Video from the scene showed Conservative leaders pleading with the youths to respect the sanctity of the site and the day but to no avail.

Labor party MK Gilad Kariv, the first reform rabbi to serve in the Knesset, who was at the scene, condemned the youths.

“For them, I weep,” Kariv tweeted. “Shouts and curses and then songs of devotion to Jerusalem. This is what senseless hatred looks like under the guise of God’s love.”

Jewish tradition teaches that the temples were destroyed due to senseless hatred between Jews, among other reasons.

“I am beyond appalled and dismayed by the baseless hatred demonstrated by a group of extremist Orthodox zealots who disrupted the lawful Tisha B’Av service conducted by Conservative Jews at the section of the Western Wall set aside for egalitarian prayer,” Lauder said.

“The non-Orthodox streams of Judaism are every bit as legitimate as the Orthodox. If not unequivocally condemned by the Israeli government, this latest provocation will only drive a further wedge between Israel and the Diaspora,” he said, calling on Prime Minister Naftali Bennet and Foreign Minister Yair Lapid to take action.

The Ha’aretz daily reported that the Orthodox Jews were from an organization called Liba, which has been holding daily events at the site in a bid to torpedo plans by the new government to fully implement a long-frozen deal to expand the plaza.

The plan was frozen by then-prime minister Benjamin Netanyahu in 2016 due to pressure from his ultra-Orthodox coalition partners, who refused any move that could be seen as legitimizing pluralistic Judaism.

The plan would have seen the establishment of a properly prepared pavilion for pluralistic prayer — as opposed to the current temporary arrangements — under joint oversight involving all major streams of Judaism.

The original plan included three key provisions: a joint entrance to the main Western Wall plaza and the egalitarian prayer space; a new permanent pavilion greatly enlarging the existing modest prayer deck, which has served as a site for pluralistic prayer since 2000; and, perhaps most controversially, a joint council made up of representatives from liberal streams of Judaism and government representatives that would be in charge of overseeing the site.

The original decision to build a new pavilion dates back to January 31, 2016, when the government — spurred by decades of high-profile activism by the feminist prayer group Women of the Wall — approved the so-called Western Wall compromise.

But on June 25, 2017, Netanyahu, facing intense ultra-Orthodox pressure, froze the plan. While killing off the joint entrance and pluralistic governing board, however, he vowed to continue with the construction of a permanent platform.

A remnant of a wall supporting the Second Temple complex destroyed by the Romans in 70 CE, the Western Wall has been honored by Jews for thousands of years as a place of pilgrimage and prayer. But, while anyone can access the wall and the prayer plaza it backs on to, the site is managed by the Western Wall Heritage Foundation, which imposes Orthodox practices on worshipers, separating men and women and prohibiting egalitarian prayer services.

The small platform currently used for pluralistic prayer services is located in the Davidson Archaeological Park, tucked into an area called Robinson’s Arch. It is out of sight of the current mainstream Orthodox prayer plaza, separated from it by the ramp leading up to the Mughrabi Gate, which is the only entrance for non-Muslims to the Temple Mount.