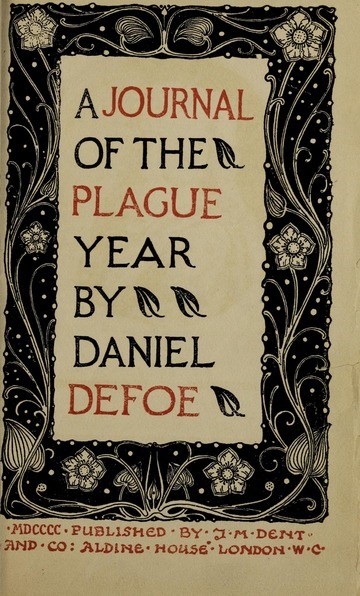 ILLUSTRATION: Daniel Defoe, A Journal of the Plague Year Written by a Citizen Who Continued All the While in London. Although Defoe was only a child during the Plague Year of 1665, he incorporated his father’s and his uncle’s recollections in his first-person account of that last major occurrence of the Bubonic Plague in London.

For obvious reasons, I have been drawn to Daniel Defoe’s A Journal of the Plague Year. In this book, Defoe chronicled the course of the Bubonic Plague in London during 1665.

What intrigues me about Defoe’s chronicle is that, intellectually speaking, he is just halfway between the Christian Middle Ages and the secularized worldview of Modern Times. He alternates between attempts to fit the Plague into a schema of sin and divine retribution with keen-sighted empirical observations.

Like Jacob and Esau, struggling in Rebecca’s womb, Defoe’s two opposing worldviews strive in the same confined space of a single train of thought. For example, early in the course of the plague, when it was still possible for a man of economic means and a government-issued certificate of good health to escape London, Defoe’s brother attempted to convince him to leave town: “Then he proceeded to tell me of the mischievous consequences which attended the presumption of the Turks and Mahometans in Asia and in other places, where[as a traveling merchant] he had been…and how presuming upon their professed predestinating notions, and of every man’s end being predetermined and unalterably before-hand decreed, they would go unconcerned into infected places, and converse with infected persons, by which means they died at the rate of ten or fifteen thousand a week, whereas the Europeans, or Christian merchants, who kept themselves retired and reserved, generally escaped the contagion.” But Defoe rejected his brother’s advice. Not knowing what to do, and suspecting that the various accidents preventing him from leaving were a sign from Heaven, he opened his Bible at random and came across Psalm 91: “Though thousands languish and fall beside thee and tens of thousands around thee perish, it shall not come nigh thee!” Thus fortified, he opted to ride out the Plague in London.

This may simply be an instance of “confirmation bias.” He wanted to stay, we might argue, and he found in the Bible exactly what would buttress what he already intended to do. Of course, we will never know what Defoe would have done if, leafing through his Bible and looking for God to speak to him, his hand had turned one page less, and he had landed on Psalm 90: “You sweep men away; they are like a dream… in the morning it flourishes and is renewed; in the evening it fades and withers. For we are consumed by your anger; by your wrath we are overwhelmed…. Our years come to an end like a sigh…” What would he have decided then?

While some of Defoe’s religious observations are characteristically pre-modern, at times, he pegs his contemporary situation in words that could well echo in our own times. Consider his skewering of the citizenry, casting off healthy precautions when they felt that the tide had turned: “…the People had cast off all Apprehension, and that too fast; indeed we were no more afraid to pass by a man with a white cap upon his head…or with his leg limping, occasioned by sores in his Groin, all which were frightful to the last degree, but the week before, but now the street was full of them… I must own that, for the Generality of the people, it might justly be said of them, as was said of the Children of Israel, when they were delivered from the Host of Pharaoh, when they passed the Red Sea and looked back and saw the Egyptians overwhelmed in the water, viz, that they Sang his Praise, but they soon forgot his Works.”

Reading this work of “faction” in 2020, (to use the term coined by Alex Haley in describing his historically grounded novel, Roots,) I am struck more by its continued relevance than by its dated quality. In our year, too, we have seen people follow their biases rather than face facts unflinchingly. We have seen people revert to fatalistic patterns of thought and regress to magical thinking, in a 21st century echo of Defoe’s Restoration-Era Londoners.

Where we, as contemporary Jews, differ most from Defoe’s religious stance, is that for us, a reliance on science and a posture of faith are better integrated. God creates the world, including ourselves, including our human level of intelligence. We are meant to use God’s gifts for good. That means, among other things, that we should do the science and then follow its findings, even if they are politically inconvenient. Science is real, not because it is infallible, but because it is tested and refined. The effort of science to disclose laws of nature reminds us of a basic claim of Judaism: that our God speaks to us in laws. The laws of Torah are not gravity and electromagnetism, but they are still laws: laws for a free people, laws for creating a healthy society, laws to make tangible our spiritual ideals in the “darkling plain” of real life.

Above all, when we compile our own journals of the Plague Year of 2020, we should reflect on the same issues as Defoe considered, albeit from our different standpoint. Life is fragile. We should do what we can to preserve it, to help each other as well as ourselves, to be God’s partners to make blessings real in a time of challenge.

May the ending of 5780 be an “Amen” to the words of the old prayer book: “A year of sorrows draweth to a close…” L’shanah tovah!