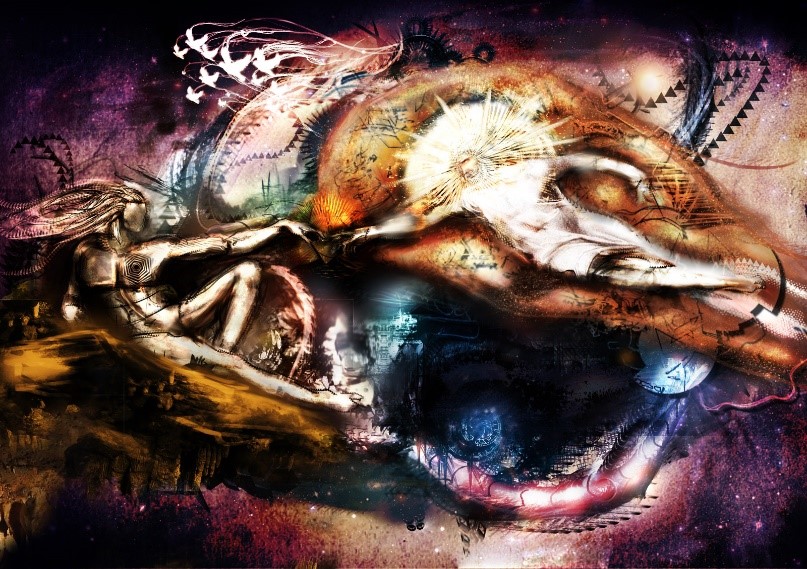 Note the variation on the theme of “The Creation of Adam” in the famous Sistine Chapel painting.

We all make plans, and then life happens, and things get out of hand. Then, the real test begins.

In an important way, that is the central story of Judaism. The main character of the Bible experiences exactly that. The main character, of course, is no man, but rather God. God creates a good world, and places humans in a privileged position in it. But within another two chapters, the humans disobey God and lose their Paradisiacal childhood. One more chapter, and murder enters the world. Not long after that, God almost gives up on humanity, washes out the test tubes, and starts again with Noah. But people still prove nearly impossible to control. Then, belatedly, God turns to Abraham and begins the long-range project of guiding, not coercing, humans in the path of goodness.

Thinking about the Biblical account of the creation of humanity, the Rabbis made a startling point, clothing it in a wonderful legend:

A later Rabbi, Rav Huna the elder of Sepphoris, added an addendum to the legend: While the ministering angels were disputing with each other, the Holy Blessed One created the human. Said God to the angels: What’s the point? na’asah adam: The human is already made!

There’s a pun in the Hebrew that’s worth explaining. When God says, “Let us make a human”, the Hebrew word is “na’aseh”—the Hebrew letters nun/ qyin/ sin/ heh. The Bible is written with consonants only, the vowels added by oral tradition. One of the ways that the Rabbis found added nuances of meaning in the Bible was to consider alternate ways of vocalizing the consonants of the received text. By changing one vowel, na’aseh becomes na’asah, meaning “already made.”

The point of the legend is that humans are messy and complicated affairs, part good and part evil. God takes a risk in creating us.

God chooses the latter path. God did not create us as moral robots, automata lacking in free will and programmed to do only good. It would have been a different world, had God done that instead. There would be no murder. We can speculate to our hearts’ content, but the real world is one where God has made us as creatures possessing the potential for both good and evil. The freedom to choose is ours, and therefore the responsibility is ours also.

This has a striking implication for us as Americans in this political season.

A 2019 study, updating the “Authoritarianism Scale” developed in 1981 by the psychologist, Bob Altemeyer, has shown that a significant percentage of Americans now subscribe to authoritarian political views. They not only prefer a strong leader to disorder, but also express a willingness to give up constitutional liberties for the sake of achieving order. There are some such people on the political Left, more on the political Right, and their numbers are growing.

This ought to be of concern for everyone who cherishes the characteristically American constitutional approach to liberty through the system of checks and balances among the various arms of government. An authoritarian leader may be able to get the trains to run on time, but he will make a train-wreck of the civil liberties that are the pride and glory of American citizenship.

But it ought to be of even greater concern for us as Jews. The same survey included questions that reveal a disturbing correlation between authoritarian leanings and anti-Jewish bigotry. Consider these two survey statements, with which people were asked to agree or disagree:

This shows that the desire for a strong leader is not simply a yearning for stability in turbulent times. It is not simply a call for law and order. It is more specifically a linking of law and order with a tolerance for injustice perpetrated against the weak, the disenfranchised, the newcomer, and of course, against the Jew. The desire for a strong leader correlates in a scary way with people who want to deny the history of anti-Semitism. This leads straight to the wiki-torch burning marchers at Charlottesville chanting, “Jews will not replace us.”

Religiously, the Biblical and Rabbinic stories about the creation of humanity are connected to this piece of social psychology in an important way. Judaism teaches us that the desire to override the complexities of society by creating a Strong Man, a Dear Leader, a Duce, or a Pharaoh, is fundamentally an exercise in idolatry. God makes us with our messy mix of attributes, giving us the capacity for conscience and compassion along with our killer instincts. God’s laws are not meant only to suppress deviance, in the fashion of some dictatorial regime. God’s laws are meant to cultivate the finest within us. That includes the ability to think critically about our social compact and to avoid the mistake of putting any one leader above the constraints of ethics.

Authoritarians want Pharaoh, in one guise or another. Judaism teaches us to be free of Pharaoh by living a life of covenant, a life in which justice, mercy and humility are our crowing virtues.

I pray that, as a nation, we will find our way back to these life-enhancing priorities. Amen.