LEARNING THE ART OF THANKSGIVING 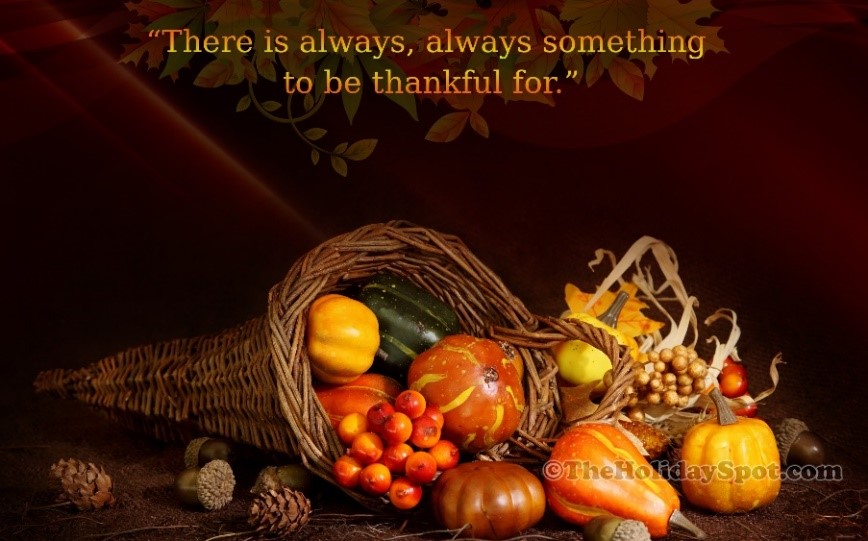 With the approach of Thanksgiving, we should ask ourselves how to give thanks in 2020.

Some immediate answers seem callous or short sighted. Should I be thankful that my loved ones and I are not among the quarter million fatalities to Covid-19 in our country? Of course, but what if one of us is carried off in the next wave? And even if the dying stopped now, what could I say to the loved ones of that quarter million? The mantra that we are about to turn a corner with our marvelous new vaccines doesn’t address the real pain and the real anger that we feel, as part of the wealthiest nation in history blundering its way through a lamentable response to the challenge of the day, because we never mustered the self-discipline to shut down properly and stop the cycle of infection.

Should I be thankful for living in a beacon of freedom and hope? Yes… but I have never felt as unsure as I do today that the hallmark of our remarkable democracy, the peaceful transition of power, will happen without grave disturbance.

Should I give thanks that our stock market is again climbing towards new heights? That’s great for some of us, but it doesn’t do anything for those who lost their livelihoods in 2020 and for whom the social welfare safety net, partial though it may be, is under attack.

Should I be thankful that I will soon be with my personal circle, engaged in the comforting rituals of food and football with family and friends? I will not be with them this year, and the best public health advice is that we should forego the travel and the mixing of the holiday season. Virtual hugs are still the order of the day.

But don’t give up on giving thanks. The challenges are real, but that only means that we will have to dip deeper into the wellsprings of gratefulness to recapture the art of thanksgiving.

Let’s take our inspiration from the Bible. Specifically, I invite you to think with me about the second patriarch, Isaac son of Abraham. He is in some ways the lowest profile patriarch. His career is not filled with exploits parallel to those of his father or his son, Jacob.

And yet, it is precisely Isaac, I believe, who knew the secret that we need to relearn today.

Last week, we read Genesis 24, the story of Isaac’s and Rebecca’s marriage. When Rebecca traveled to the Land of Israel, in the company of Abraham’s Chief of Staff, and their travel party reached the Negev, the home region of Abraham and family, Rebecca first laid eyes on Isaac. What was he doing at that moment? Vayetze yitchak lasuach basadeh. Isaac had gone out for a contemplative walk in the field.

What a remarkable introduction to a sensitive soul! What was Isaac doing? Getting close to nature? Communing with the Creator of all that he saw? Meditating?

What do we know about Isaac’s earlier life? Mainly, that he was bound on the altar, by his own father, and very nearly killed, before the Angel of the LORD raised the ethical level of religion for all of humanity--- if only we would listen.

Isaac, therefore, was a survivor of soul-searing trauma. It could have made him a cynical shell. But it seems to have worked in a different way. Isaac sought the stillness and beauty of the meadow as the shadows lengthened and the evening breezes gentled the air. In one image, the Bible opens for us the heart of a sensitive, dear man.

The marriage story concludes, “Isaac brought Rebecca to the tent of his deceased mother, Sarah, and he took Rebecca as his wife. Isaac loved her, and thus found comfort after his mother’s death.” This is a poignant conclusion to the story, tying together the generations. We realize, in this indirect manner, that Isaac has been in mourning for years. Perhaps that is what drew him to meditate in the meadow?

Let’s note that the Bible seldom speaks about married couples loving each other, but it makes a point of it here. For Isaac, his marital love and the healing of his bereaved soul go hand in hand.

As we move into the later chapters of the Isaac story, it seems that Isaac’s character strength develops in the direction suggested by this earlier narrative. Isaac was successful at herding and farming. The Bible specifies that he achieved a yield-to-seed ratio of 100:1. That was unheard of before the modern industrialization of agriculture! His neighbors grew jealous of his wealth and stopped up his wells. Isaac retreated from conflict and dug another well; the hostile neighbors stopped that one as well. On his third try, he dug a well, which the neighbors did not molest. This one he called Rechovot—that is where our own local Rehoboth Beach on Delmarva gets its name from. The name means “breadth”. The Bible explains the name as an expression of gratitude to God: “Now at last the LORD has granted us ample space to increase in the land.”

What Isaac is teaching us here is that even in a season filled with losses, the moments of peace, of grace, and of hopefulness are not to be spurned, not to be written off as lucky coincidence. Isaac refuses to succumb to a negative basic interpretation of life and of the world.

That’s the attitude we need for this year’s Thanksgiving. We need to take our losses seriously. We need to mourn them piously. We need to guard against further loss energetically. But while doing all of that, we also need to be thankful for what we have and what we gain.