The Weekly Parashah: Chaye Sarah
The Delicate Matter of Succession 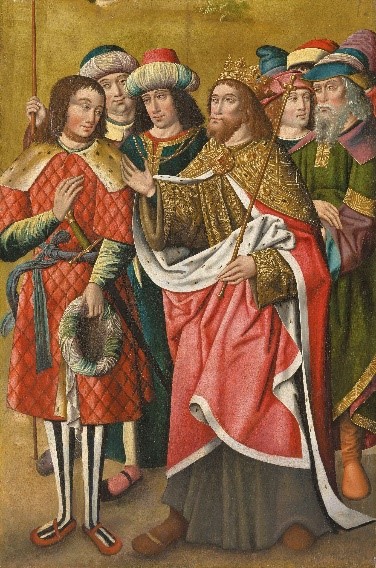 ILLUSTRATION: King David endorsing the succession of Solomon, by The Játiva Master (Active Valencia 1490-1515). The still-vigorous David in this painting is not at all faithful to the actual Bible story.

I first learned the story of the last days of King David’s life and the succession of his son, Solomon, when I was in middle school. At that time, as was expected of us, I took the story at face value. I simply assumed that the Bible was giving a positive account. David chose Solomon because that was the way it was supposed to be. I did not inquire whether the biblical author was covertly disapproving, underneath the surface of reporting. Indeed, in the pre-critical manner in which the Bible was presented, in orthodox parochial school, the thought that the Bible author might be subtly signaling disapproval was so far out of bounds as to be beyond the horizon.

I grew up. Most of the children in my circle grew up, but only a few remained strongly connected to the religious life. Of that number, fewer still strove to understand the Biblical message using the same critical intelligence that they applied to secular questions. That is a great loss, because the Bible, maturely understood, continues to be one of the great sources of moral and spiritual instruction for us in all the challenges that we face.

Engaging the Bible with an adult’s perspective, and with the permission to ask critical questions, I came to understand many of its stories quite differently. In the case of the story of the succession of Solomon to David’s throne, I realized that the author created a marvel, a story that reads one way on the surface but quite differently, when considered minutely. After all, the author was working for Solomon. He could not criticize either David or Solomon but so far. Yet, the author was no political hack. His first loyalty was to the God of Israel. The artistry of the story is that on the surface, it proclaims that Solomon’s succession was blessed, but underneath it, the author gave us a cautionary tale of the danger of corruption whenever people elevate a king over God’s laws.

To understand this, we need to hear some of the gory details: David, on his deathbed, is an impotent king, both physically and politically. As his own body fails him, one of his sons, Adoniyahu, proclaims himself king. But David’s ambitious wife, Bat- Sheva, abetted by Natan the prophet, outmaneuvers Adoniyahu. The wife and the prophet plan an intervention, which the Bible describes in all its tactical sophistication. The plan works, and David, unaware that he has been played, raises himself up from his sickbed to declare that son, Solomon, will rule. Bat-sheva responds with what must rank as the most insincere line of biblical dialogue: May my lord, king David, live forever!

The Bible continues with further unedifying details. On his deathbed, David gives Solomon instructions, to prepare him for kingship. They include some chilling directives to Solomon to settle old scores. Solomon is told not to allow the violent general, Yoav, to die a peaceful death. Solomon complies, sending his own hit man, Benayahu, to the Holy Tent of the Lord, where Yoav had sought sanctuary. Benayahu kills him right there, with Solomon’s express permission, no doubt, breaking a strong taboo in ancient Israel in the process.

Solomon also gets rid of Adoniyahu. Here, it is a question of who is the more cunning fox, and the answer is, Bat Sheva. Adoniyahu had sought an interview with the Queen Mother. He told her that he accepted his brother’s rule, but requested, as a consolation prize, to marry the woman who had served David in his last days, Avishag the Shunamite. He may have thought that he was preparing for a coup, but Bat Sheva saw—and acted on-- the fatal flaw in his plan. She forwarded his request to Solomon, knowing that her son, schooled in the sordid ways of palace succession, would interpret that request as treason. Predictably, Solomon did just that—and Adoniyahu met his end at the hand of the same Benayahu, probably, dying by the same dirk as did in Yoav.

Now: how inspiring is that? Are we reading the Bible—the Holy Bible-- or Niccolo Machiavelli’s The Prince?

Here is where the subtle message comes through. The account is part of the Book of Kings. Where and when was that book edited? In Babylon, in Exile. The entire experiment of kingship in Judah and Israel had come to a sad end. The Israelites had lost their king, their state, their temple, their freedom, and their land. They were sitting and weeping by the waters of Babylon.

And yet, all was not lost. They still had God, even in defeat, even in exile. The words of the ancient prophet, Samuel, newly remembered, now framed the entire enterprise of trusting in human autocrats. Appoint a human as your king, Samuel had said, all those years ago, and you are running the great risk of becoming no better than any other nation. You have God as king. Why would you go down to the level of the corrupt political cultures surrounding you? In such a world, you have political favoritism and cronyism, unreasonable extortions of the citizenry, and always, the fear that the king will not remain within the bounds of the law. Your chief executive may be your demise.

Looking back on the sweep of national history from the vantage point of the Exile, the Bible’s authors say, the greatest of the kings was David, and the wisest one, Solomon. And yet, precisely there, those authors show us the ugly way in which the sausage was made, the corruption of the succession of Solomon. Why does the Bible do that? To remind us that when we make the mistake of trusting the king rather than God, then ultimately, both the king and we, the people, go down to defeat.

Seen in this way, the bible is not merely a just-so story. And it is certainly not a Sunday School pageant script. No: it is a guide for us today…. Especially today.