THE MEANING OF THE MASK 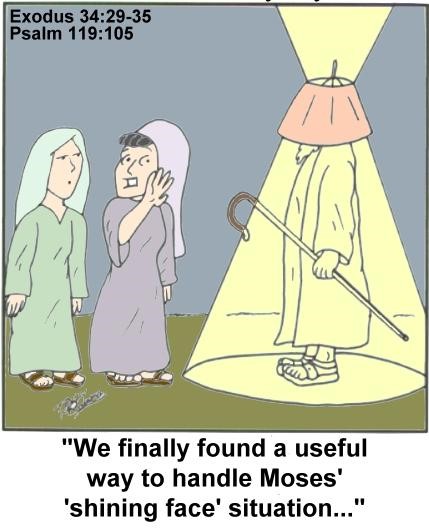 Yesterday, I asked you to consider why Moses wore a veil over his face at certain times. A first look at the story (Ex.34:30-33) reminds us that: Aaron and all the Israelites saw that the skin of Moses’ face was radiant; and they shrank from coming near him. But Moses called to them, and Aaron and all the chieftains… returned to him. Moses spoke to them. Afterward all the Israelites came near, and he instructed them concerning all that the LORD had imparted to him on Mount Sinai. When Moses had finished speaking with them, he put a veil over his face.

So perhaps Moses veiled his face because he was frightening to behold, and he wanted to spare the Israelites? If so, why did he leave the veil off when he spoke God’s commandments? Maybe because at that time, he wanted to keep them properly awe-struck, so that they would obey? Scaring the daylights out of them could be justified for the good cause of getting them to take God’s laws seriously, but not at other times?

This is close to the interpretation of the great Sephardic commentator, Abraham ibn Ezra: “The radiance was a reliable witness that God had indeed spoken with him.” Moses kept the veil off to show that his words were from God and needed to be received with the utmost seriousness.

This reading is certainly relevant to our situation today. We do need to scare the daylights out of people who don’t take the virus seriously, who stand outside of Bob’s Gun-shop downtown in long, tightly packed lines (this has been observed in the last couple of days), who frolic at Spring Break as if their youth makes them invulnerable. Dr. Fauci—who knows medicine better than the others who share the podium with him—has certainly been consistently sobering, so that the public will not grasp at the straws of ill-considered reassurance.

That’s a good message for a first reading. Tomorrow, we will dig deeper. Please start to ponder this: could the veil have been a deterrence against idolatry on the part of the people? Could it – paradoxically-- have been to keep Moses humanly connected? There’s lots more to think about.