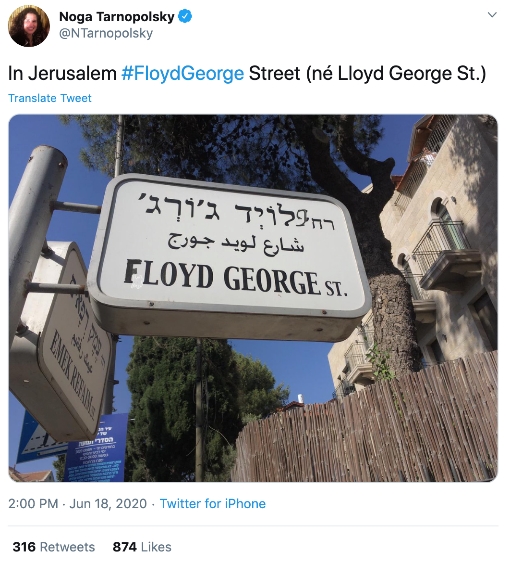 ILLUSTRATION: The “Lloyd George” street sign in Jerusalem, named in honor of the British Prime Minister, David Lloyd George, has been informally renamed in memory of the murdered George Floyd.

Right-wing anti-Semitism depicts the Jew as the eternal enemy of humankind, and most particularly, of Aryans/ of Whites/ of Christians/ of the majority culture/ of “true Americans” (that was the point of the Nazis rallying in Charlottesville, three years ago). Left-wing anti-Semitism depicts the Jew as the money-hoarding oppressor of the native and the downtrodden. This latter version of anti-Semitism has absorbed and amplified the anti-imperialist critique of the Colonial Western powers. In this narrative, Israel is the successor state to the European racists, Cecil Rhodes and company. The Palestinians are to be conflated with the Blacks, the Native Americans, and the indigenous.

The Left-wing anti-Semitic narrative will receive a huge boost should Prime Minister Netanyahu go ahead with his annexation plans. His extension of Israeli law to various settlements in the Jordan Valley would be a bit of partisan political gamesmanship to shore up his support among right-wing Israeli voters, without meaningfully enhancing the security of the Israelis as a nation. I hope that Israel will not take that ill-advised step.

But regardless, the basic charge that Israelis are latter-day western colonialists is fundamentally false. Unlike the White, European settlers in Africa or the Americas, when Jews went to Israel, they were returning to the homeland of our people. Zionism was originally called shivat Tsiyon, the Return to Zion, for precisely that reason. There are legitimate criticisms to be made, both in terms of the inequitable funding of institutions serving Arab Israeli citizens and of Israeli policies in the administered territories; but the justified critiques do not add up to an identification of Israel as the Jewish version of the Reactionary White governments of Rhodesia and South Africa of the last century.

- - - - - - - - - One of the painful ambiguities of the current moment, for a Jew and a Zionist, is that we are ethically mandated to stand against the systemic racism that has imperiled and oppressed our fellow Americans from the African Diaspora; and yet, also, that some of the leaders of the #BlackLivesMatter organization have espoused anti-Zionist and anti-Semitic positions and promoted the “Boycott, Divest and Sanction” campaign against Israel. I believe that the 2016 statement of Jonathan Greenblatt, CEO of the Anti-Defamation League, is still relevant:

“…we are well aware that a small minority of leaders within the Black Lives Matter movement have supported anti-Israel — and at times anti-Semitic — positions. We have repeatedly made clear that we take offense at those positions and have strongly condemned statements made by those who have expressed support for efforts to boycott and divest from the State of Israel. We will continue to call out such statements because they often are rooted in bigotry and do nothing to advance a peaceful resolution of the conflict. Rather, they only perpetuate hostility and hate. At the same time, we also know that many of the concerns raised by participants in the Black Lives Matter movement are critical civil rights issues that merit attention. “(Letter to NY Jewish Week, July 27, 2016)

Greenblatt’s nuanced position makes sense. We should commit ourselves to working to end racism in the United States, and we should recognize that African Americans have been among the principal victims of that scourge. At the same time, we should do what we can to mitigate the penetration of anti-Semitic biases among those working to end anti-Black racism.

One specific instance of this dual mandate is our obligation to refute a particular anti-Israel untruth that has gained traction in connection with the protests against police brutality in America: the canard that Israel is somehow connected with the police murder of African American citizens. Consider the following news item:

“Israel not to Blame for Tragic Killing of George Floyd

“Actress Maxine Peake gave an interview with the Independent in which she claimed: "The tactics used by the police in America, kneeling on George Floyd's neck, that was learnt from seminars with Israeli secret services." Peake's bizarre claim originates in a Morning Star piece from June 1 headlined: "Minnesota cops 'trained by Israeli forces in restraint techniques.'" The newspaper was founded by the Communist Party of Great Britain.

The piece seems to be solely based on a short article on Minnesota Public Radio, which noted that 100 officers attended a conference hosted by the Israeli consulate eight years ago. The conference was not about policing or restraint techniques though but was instead focused on counterterrorism and mainly looked at techniques to prevent terrorist acts, such as suicide bombings. None of this appeared to trouble Shadow Education Minister Rebecca Long-Bailey though, who glowingly re-tweeted the interview.”
(Spectator-UK)

The spontaneously renamed Jerusalem street sign in the illustration of today’s column points to a part of the story that deserves to resonate more loudly. David Lloyd George was the British Prime Minister who supported the “Balfour Declaration” of 1917. When Israel became a state in 1948, its new government removed most of the British names of the streets of the country. But certain names were retained—King George V, Allenby, and of course, Lloyd George—because those leaders promoted the reestablishment of Jewish sovereignty in our homeland.

Lloyd George, therefore, is a “good-guy” in the popular mind of Israel. But that did not make the street sign sacrosanct. The spontaneous emendation of the sign is a show of solidarity with the American murdered by a Minneapolis policeman, while others looked on with callous indifference. That’s the heart of Israel.