WHAT MAKES A NATION GREAT? THE JEWISH ANSWER 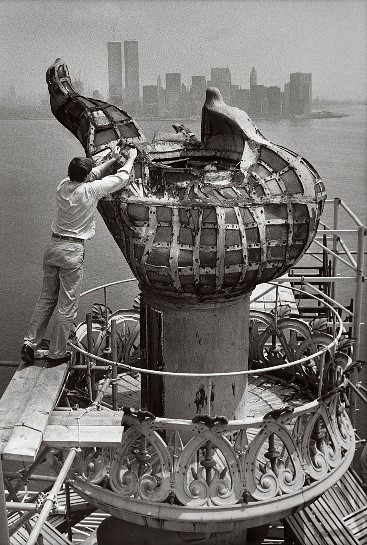 ILLUSTRATION: Workers prepare to move the original torch of the Statue of Liberty to a museum, 1985.

Yesterday, we began thinking about how Judaism understands national greatness. We explored two categories: 1) the balance between the individual and the collective, and 2) the need for self-control. Today, we will continue the exploration, by considering two additional categories of a nation’s posture that can make for greatness: 1) Gratitude for blessings received. and 2) Generosity of spirit

America is a blessed land. It is rich in natural resources. Geography permits agriculture, industry, commerce, communications, transportation, to an extent that people elsewhere in the world, lacking those riches, appreciate fully, even when we ourselves take those assets for granted. Just ask Israelis what it feels like to have a homeland deficient in oil wells, and how much they appreciate the new situation, now that they have discovered abundant natural gas reserves!

Judaism teaches definite lessons about how to react to blessings given to us. While we can find relevant passages throughout the Bible, the book we are now reading, Deuteronomy, is singularly filled with magnificent expressions of the attitude of gratitude that Judaism bids us to internalize:

For the LORD is bringing you into a good land, a land with streams and springs and fountains issuing from plain and hill; a land of wheat and barley, of vines, figs and pomegranates, a land of olive trees and [date] honey; a land where you may eat food without stint, where you will lack nothing; a land whose rocks are iron and from whose hills you can mine copper. (8:7-9)

The very next verse brings it all home. We must remember to thank God for these blessings. Above all, we must not become arrogant, thinking that our good fortune is somehow our doing, as if we were creators and not the beneficiaries of the variations of geography:

When you have eaten your fill, give thanks to the LORD your God for the good land which He has given you… When you have eaten your fill, and have built fine houses to live in, and your herds and flocks have multiplied, and your silver and gold have increased, and everything you own has prospered, beware lest your heart grow haughty and you forget the LORD your God… and you say to yourselves, “My own power and the might of my own hand have won this wealth for me.” Remember that it is the LORD your God who gives you the power to get wealth… (8:10-14, 17-18)

Gratitude is not only about remaining humble. It is also about being generous. Since our property is only ours in a limited sense—"The Earth is the LORD’s, and all that it holds” (Psalm 24:1) – we are the stewards, not the masters, of our assets. The true owner—God—wants us to share what we have with those who are in need:

Do not neglect the Levite in your community, for he has no hereditary portion as you have. Every third year…. The Levite, and the stranger, the fatherless and the widow in your settlements shall come and eat their fill, so that the LORD your God may bless you in all the enterprises you undertake… If there is a needy person among you… do not harden your heart and shut your hand against your needy kinfolk. Rather, open your hand… (14:27-29; 15:7-8)

America became a greater state than it had formerly been, when the New Deal and associated programs created a national commitment, rather than a merely personal one, to philanthropy. Today’s attacks on our welfare system are not merely mean-spirited. They are un-Jewish.

LOVING YOUR OWN, AND ALSO THE STRANGER IN THE GATE

As we have seen, Judaism teaches that the proper way to show gratitude is to be guided by that feeling towards generosity of behavior towards others. But who has a claim on our generosity?

On the one hand, Judaism teaches that the national community of Israel is not only our primary category of self-identification, but also the vehicle for our spirituality.

Judaism doesn’t have a strong tradition of solitary communion with God. (There is such a tradition, but it occupies only a corner of Jewish consciousness.) That is because we do not regard the world as inherently evil, such that one must distance oneself from the world in order to grow close to God. Rather, the challenge is to do God’s will in the world. Since people are social beings, our social selves are not impediments, but rather instruments of the spiritual quest. That makes “Israel” one of the three main concepts of Judaism, along with “God” and “Torah”. We are bidden to “love our neighbor as ourselves”, and at times we understand that to put the love of one’s fellow Jew in the foreground.

But our sense of national community is not clannish. The “neighbor” explicitly includes those of other ethnicities who reside in the land of Israel along with the Jewish majority. The Torah is filled with injunctions to extend equal justice to the resident alien, and more—to love the alien. It may surprise some, but the text is clear: the Torah tells us to love the “stranger” more often than it commands the love of any other person.

This is immediately relevant to the long-standing American debate over immigration. It is shameful and ignoble to say that we Jews deserved the right to come to these shores, but others, who didn’t “have the sense” to flee the Tsar before 1914 or Hitler before 1939, don’t have that same right. That is a matter of elementary fairness.

But greatness goes beyond fairness. America is closer to being great when it is enriched by the energies and talents of people who hail from across the world. Welcoming those strangers and helping them to become strangers no longer has been a hallmark of American greatness across the generations.

This has always been a struggle. Americans have often been churlish about sharing their land with newcomers. Protestants tried to limit Catholic immigration in the mid-19th century, and by the last quarter of that century, they succeeded in shutting off Chinese immigration. This was a real sign of ingratitude, because Chinese labor was welcome when it was needed to construct the transcontinental railway. American nativists finally succeeded in shutting the doors to non-Anglo Saxon, non-Nordic immigration in the 1920’s, and those doors remained locked when Jews were desperate to escape Hitler. American bigots were accessories in elevating the count of Hitler’s victims.

The struggle continues today. In fact, it has grown more difficult. In every generation, there are facile arguments to justify xenophobia. Jobs are scarce. Public order is fragile. True, but short-sighted, because today’s newcomer is tomorrow’s good soldier, good worker, good artist, good inventor, good citizen.

It seems fitting that an American Jewish poet, Emma Lazarus wrote the words that best express this aspect of American greatness, words that adorn the pedestal on which the Statue of Liberty stands.

With conquering limbs astride from land to land;

Here at our sea-washed, sunset gates shall stand

A mighty woman with a torch, whose flame

Is the imprisoned lightning, and her name

Mother of Exiles. From her beacon-hand

With silent lips. "Give me your tired, your poor,

The wretched refuse of your teeming shore.

Send these, the homeless, tempest-tost to me,

I lift my lamp beside the golden door!"

America—I speak to you as a proud Jew who is also a loyal and loving son of this country—be great again: truly great, in the right way, the way of the spirit.