GOD ASKED ME FOR A LIGHT! 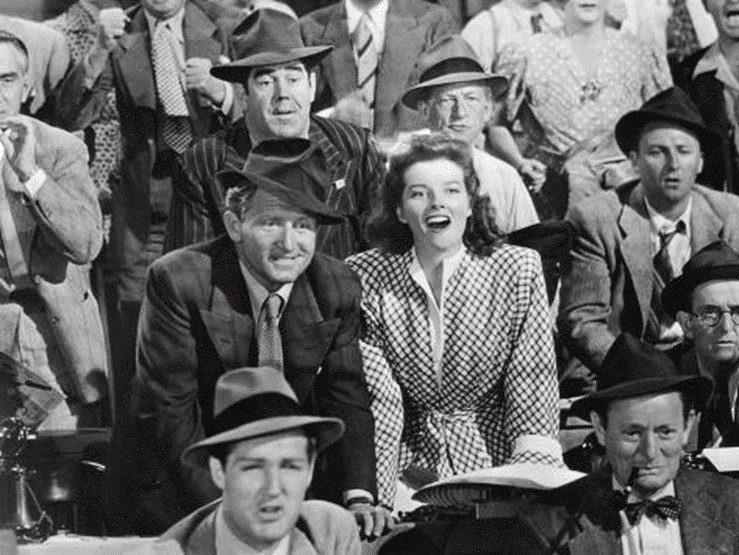 Illustration: Tracy and Hepburn in the 1942 movie, “Woman of the Year”.
Of all the men, she has chosen to be with him…

To read the Rabbis’ comments on the Bible, you would be on safe grounds to conclude that they—sober-minded, lawyerly scholars—are nonetheless in love.

When people are falling in love, they find significance in the smallest gesture. Getting a love letter is like an inquisitive kid getting a microscope. You scrutinize the letter, savor the word choice, read and re-read, relishing every moment. Lawyerly, scholarly people do the same thing when they are in love; it’s just that their honed reading and analytical skills come in handy, here.

That’s how the Rabbis read the Bible. In midrash after midrash, they proclaim their amazement and joy that God loves us.

This Shabbat, we read about the nightly lighting of lamps in the Ohel Mo’ed, “The Tent of Appointment” (Leviticus 24:1-4): The LORD spoke to Moshe, saying: Command the Children of Israel, that they take you oil of olives, clear, beaten for lighting, to draw up lampwicks regularly. Outside the Curtain of the Testimony, in the Tent of Appointment, Aharon is to arrange it, from sunset to daybreak, before the presence of the LORD, regularly… (Translation: Everett Fox)

When I read the passage, I can relate to the awe that the priestly beholder would have had, in the softly lit interior of the Tent. It may well be like the powerful sense of God’s Presence that I feel when I am alone in the Temple Israel sanctuary at night, and I see the pure flame of the Ner Tamid— and only that light— illuminating the sacred space.

But I must confess that, reading and reading this passage, I did not guess how a lover might read it, until I studied the rabbinic midrash. There, we have example piled on example of the following thought:

You [O God] give light to the celestial as well as to the terrestrial beings and to all who enter into the world, yet You desire the light of Israel! Hence it is written, “Command the Children of Israel, that they take you oil… beaten for lighting. (Leviticus Rabbah 31:6)

Think of a 1930’s musical, where all the adoring guys offer to light the starlet’s cigarette, and she accepts a light only from the man whom she favors. With allowances for the low-brow nature of the analogy, that’s what the Rabbis are saying. “God has all the light in the universe. After all, God made the sun and stars. But God asked me—the House of Israel—for light! Wow!

If you, too, did not catch the perfume in the Leviticus passage until you read the breathless exclamation of the midrash, perhaps we both need to remember the meta-message of Rabbinic Judaism, in its historical context. What are the Rabbis saying, and why are they saying that?

The Rabbis rose to leadership at one of the truly challenging times in Jewish history: The Temple destroyed, the people decimated, and the Messianic rival of their Judaism, Christianity, making tremendous gains. The last challenge was particularly problematic, because those guys could quote our Bible back at us. Their charge—God is punishing you for rejecting the Messiah. God is angry with you. But God loves us. Your God is a God of wrath. Join us and feel the Love.

Answering that charge, the Rabbis insisted: No, God loves us! If we are punished, we deserve it, but the punishment does not, cannot, mean the end of God’s love for us. The Torah itself is an expression of God’s love. We are God’s people, Chosen out of love. And we will ultimately find redemption, if we fulfill the covenant, in love.

In that mind-set, the Rabbis find love in all sorts of scriptural places—even the commandment to light the lamps every evening in the Ohel Mo’ed.

Here’s the take-away from this lesson: We have a challenge. Having unwittingly internalized the spurious Christian charge that ours is only a religion of law, we Jews sometimes go about living our religion as if it’s just a matter of ethics. That’s a great place to be, when you are in doubt about God, because at least you won’t be hurting your neighbor. But that’s not enough. You need to nourish the spirit. And that is a matter of love.

It’s not un-Jewish to say, “God loves me”. In fact, the Rabbis shout if from the rooftops of their academies.