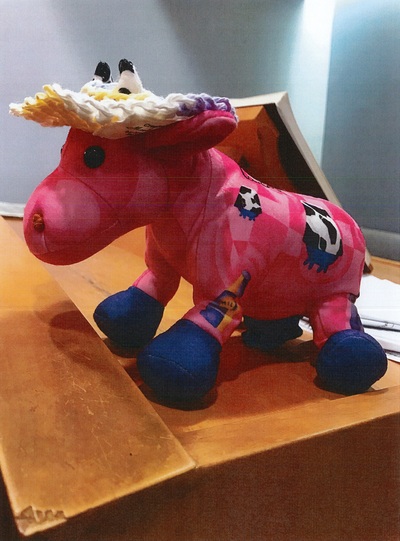 One of the joys of spending one’s life learning Torah is the satisfaction of reaching an age where an answer, previously encountered but not signified, now truly makes sense. The answer has been there all along, but your life has finally caught up with it.

This week’s Torah portion is filled with riddles. A few examples: what is the meaning of the strange law of the red heifer, the cornerstone of the biblical ritual-complex for the purification of the impure? What was the sin of Moses for which God denied him entry into the Promised Land? And how did Aaron, who stood mutely at Moses’ side, share in his sin? How did the bronze snake sculpture function as an antidote to the plague of snake-bites—is that magical thinking, or idolatry, or what?

One lifetime is probably too short to answer all the riddles of the Torah, but at least one smaller riddle now feels more resolved in my thinking: the choice of Eleazar, not Aaron, as the priest in charge of the preparation of the Red Heifer:

The LORD spoke to Moses and to Aaron…. This is the law of instruction
that the LORD commanded… take…an unblemished red cow…Give it to
Eleazar, the priest… Eleazar, the priest, shall take some of its blood… He
shall burn [the entire slaughtered animal]… and it shall be…for sin expiation.
(Numbers 19:1-10)

One wonders why Eleazar is designated as the one to perform the sacerdotal functions that previously Aaron had been designated to perform. Why pass over the chief priest in a ceremony of such obvious importance for the religious life of the entire community?

As is usual with “good problems”, our tradition has generated more than one reply—a sign that no one reply completely satisfies.

1) The commandment is, by nature, intended to be carried out by the vice-high-priest. This is the statement of the Midrash, repeated by Rashi. My response: “Could be?!” The XO has certain traditional duties that the CO customarily delegates. The Vice-Principal, not the Principal, is often the school disciplinarian. The concept of a vice-high priest, although not hitherto indicated in our biblical narrative, may be at work. But that’s a stretch…

2) In this first generation of the Biblical priesthood, who was there? Only Aaron, his sons and grandsons. So the designation of Eleazar means, “a common priest”, rather than the High Priest. The Talmud (Tractate Yoma) ponders that solution, as well, without reaching a consensus solution. This answer also resonates, but fails to put the question away. After all, the High Priest can not do everything alone. A leader can not be both leader and community.

In our days, this issue appears as a structural tension within synagogue life. Many congregations have a larger board of directors and a smaller executive committee. If the executive committee handles all the serious decisions and relegates the broader committee to the role of rubber stamp, good talent will stop seeking to serve on the broader committee. But there are some questions which need to be considered expeditiously and then resolved; a streamlined and effective core of senior leadership is more able to accomplish that. The issue is one of balance.

3) Aaron was somehow personally unfit for the Red Heifer ritual. This is the suggestion of Moses of Narbonne, a leading preacher in the High Middle Ages. Aaron was connected to the sin of the Golden Calf, and the taint attached to that made him the wrong person to prepare the Red Cow. Ingenious—but unbiblical. Aaron is depicted as dealing with sacred cows all the time. Nor is he confined to routine daily sacrifices. In Leviticus 16, Aaron is the one to handle the offerings of the Day of Atonement—not just the two goats, the one sacrificed and the other one sent into the Wilderness (the “scapegoat”), but also the bull of “sin offering” (Lev. 16:11).

4) Eleazar is being groomed for leadership by being given at least one critically important job during his father’s tenure. This is the answer that now makes more sense to me, because of where I am in life.

The Red Heifer chapter comes immediately before the “Waters of Meribah” story, in which Aaron, as well as Moses, is condemned by God for having failed to rise to the opportunity of sanctifying God in the presence of community. This is interesting. The Red Heifer chapter is a series of laws and descriptions of ritual procedure. Numbers 20 is a narrative. Presumably, the place of this narrative in the Book of Numbers as a whole is constrained by chronological considerations, but the non-narrative chapter could have fit in many places. Why was it placed here?

Our pre-modern ancestors already paid close attention to the juxtaposition of chapters in the Bible. We moderns can add our knowledge that, after a centuries-long process of composition, going back at least as far as the Era of the Judges, the Bible was in fact compiled by priestly redactors during the Babylonian Exile. Hence, traditionalists and modernists agree that the placement of Numbers 20 immediately after Numbers 19 is deliberate.

The conclusion of the Waters of Meribah story is the death of Aaron. Moses escorts him up the mountain, divests him of his High Priestly uniform, dresses Eleazar in that uniform, and then Aaron dies on the mountaintop. Eleazar descends, simultaneously an orphan and a High Priest. (“The King is Dead—long live the King!”)

By placing Numbers 19 immediately before Numbers 20, the editors/ the Divine Author of the Bible have foreshadowed the emerging role of Eleazar. By making this role God’s command, the message becomes one of the duty of any leader to groom able successors. “Apres moi, le deluge” may or may not be an accurate quote from Louis XIV, but the attitude of unconcern for the future of one’s community is a feature common to narcissistic leaders, today no less than in the reign of the “Sun King”. The Torah is telling us that God is equally close to all generations, and that we serve God well when we live with a care for tomorrow.

Perhaps I rejected solution #3 too quickly… Combining it with solution #4, we achieve an important insight: Leaders of one generation, formed by the social and intellectual issues of their own day, are not, by nature, the ones most apt to solve the problems of the next generation.

Having a newly ordained rabbi as a son, and watching his work, I am struck by how different are the terms of engagement of community to which he is explicitly responding from the assumptions of twentieth-century synagogue life. In the1970’s, there arose a non-synagogue movement, the “havurah” movement, attempting to cure Judaism of what the theological Rabbi Heschel called its “cold in the nose”. Synagogues responded defensively, co-opting the havurah but perhaps squelching its creative spirit. Looking at the failure of that episode, and looking at the challenges of today, let us recognize that we in the synagogue world need to partner with Jewish advocates outside the limits of the 20th-century synagogue, if we are to partner in forging a viable future for our Jewish community.