Different in Merit, Equal in Standing 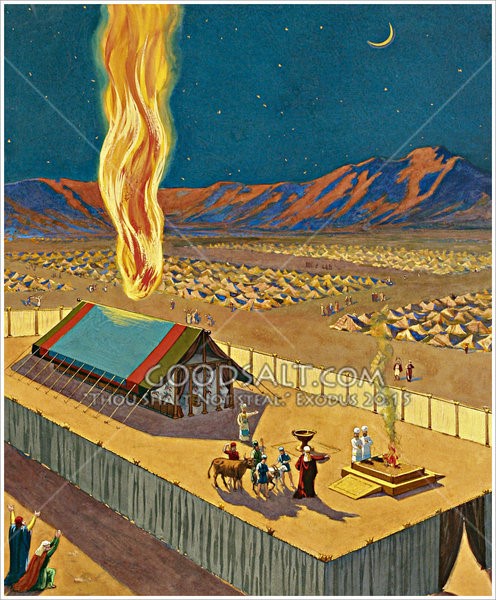 (Illustration: The Tabernacle in the Wilderness)
This was the dedication offering of the altar from Israel’s chieftains on the day of its being anointed…(Numbers 7:84)

Listening to a report about the U.S. Open Golf championship in Pebble Beach, I found myself thinking about my life, and also, about the Torah. (Of course… that’s what rabbis do. It’s not different wiring, only specialized training…)

The newscaster said that, unlike certain other top golf tournaments, this one is truly more of an “open”—a reasonably good player, say, one ranked 597th in the world, could compete along with the very top ranked golfers.

That reminded me of the two years in which I competed in the U.S. Open Chess Championship. Trust me, I was not even 597th! My ranking was “expert”, which is one full category below “master”. That tournament was truly “open”—you paid your money and you took your chances. Each year, I was content to have competed respectably, scoring 6 out of 12- including two nerve wracking draws against a competitor I couldn’t even begin to “read”, a Fidelity Computer program. Back in the day, $60 gave me the opportunity to rub shoulders with the greats for two weeks. In 1985, I found myself riding the elevator with the legendary Boris Spassky, the former world champion, and fortuitously, I had in hand a copy of a book annotating 50 of his notable games en route to winning his championship, so showed it to him and asked for his autograph, which he graciously penned (in Russian).

That inspired an idea which came to fruition the following year. In 1986, I found myself in the company of the great Sammy Reshevsky, the many-times U.S. champion and a contender for the world title. If not for the need to make a living—which Soviet grandmasters could avoid, because the state subsidized them—Reshevsky might well have become world champion before the Second World War. On the Thursday morning of the twelve-day tournament, Reshevsky, an Orthodox Jew, and I were thrown together in the hotel lobby. Each of us was waiting to see the tournament director to obtain permission to play on Friday morning and not in the evening. Shabbat observance brought us together. I was hoping for the opportunity to be paired with him, and he was amenable, but the chess masters who were present objected—I was too small a fish, and Reshevsky would not even work up a sweat beating me, whereas the other masters would tire themselves out in “real contests”. Ultimately, I was paired with a mere master—who also beat me, it seemed to me, without getting appreciably tired.

But Reshevsky and I had a great conversion. I told him about my rabbinical school classmate, Leonid Feldman, who, as a teenager in Kishinev, had been inspired to challenge the Soviet system and live a Jewishly-engaged life because he read, in an annotated volume of the 1953 Champion Candidates’ Tournament, that Reshevsky refused to play on Saturdays “until a certain star appeared in the sky.” Reshevsky was much more pleased about having inspired a fellow Jew to religious observance than to know that I enjoyed his chess games. Switching topics, I told him about my doctoral dissertation, which covered an area of Jewish law with historical significance—the delay in the timing of burials, sought by the precursors of Reform Judaism in the 1790’s. He told me that his grandfather had written “hagahos” (scholarly footnotes) on “Yoreh De’ah”, the volume of Jewish law that covers the timing of burials. So the next morning, I brought in a copy of his volume, The Art of Postional Play, and I said to him: “Many ask for your autograph, but I don’t want your Samuel Herman; I want your Sh’muel Chayyim”—which he was happy to provide. I may be one of the few people this side of the Atlantic to own a chess book with the autograph of his Hebrew signature!

And now… the connection to the Torah: Numbers chapter 7 lists, in loving (exhausting?) detail, the offerings of the twelve tribal chieftains when the Wilderness Tabernacle was dedicated. The offerings were identical. But just to take no chances, the Torah gives the sums of the weight of the twelve silver dishes, golden pans, etc. Classic and modern commentators alike find significance here. The Rabbis of the midrash defended the apparent repetitiousness of the Torah text by saying that the Torah is teaching that even the smallest tribe’s offering weighed exactly the same as that of the largest. A recent commentator continues in like vein:

Why does the text have to repeat the detailed list of offerings from each of the twelve chieftains, when all their offerings are exactly, word for word, the same?... Even though the tribes are all different sizes, their chieftains all bring the same offering. It would appear to establish that all the tribes, whether large or small in population, are equal. (Richard E. Friedman, Commentary on the Torah, Numbers 7:84.)

We live in a society placing a premium on differences. This one’s congregation is larger, that one’s smaller (the latter would say, “intimate”, or “hyimish”). But before we get lost in silly thoughts about status, let’s remember: a minyan is a minyan. One doesn’t progress from a “small quorum” to a “large quorum”, when one moves from 10 to 100. Are prayers less valuable when uttered by fewer? I do not presume to know Heaven’s perspective, but it would be hard to believe in a God who is impressed by human puffery and vainglorious boastings of alleged greatness. We say the same prayers, in rooms and gatherings large and small. I consider it a point of professional responsibility to share rabbinic teachings with small groups no less than large groups. I reject the thought I have occasionally heard expressed that a Yom Kippur shacharit worship service is less important than a musaf, or that a minchah is less important than the ne’ilah, when more people have arrived.

The truly open “U.S. Open” contests honor equality of opportunity, while respecting the fact of life that inequality of talent, superior preparation, etc., will result in varied outcomes. I want our top scientists to make breakthroughs that escape other people’s thinking, our top doctors to find cures to disease that the rest of the profession has failed to solve… but it is also important to remember that, in the sight of Heaven, we are all alike. We are all part of the family of Adam and Eve, so no one’s blood is redder than another’s.