‘A new poison’: Why the UK chief rabbi broke the mold to confront Jeremy Corbyn

Aware the Labour leader could walk triumphantly into 10 Downing Street on December 13, Ephraim Mirvis evidently decided silence was not an option

“Elections should be a celebration of democracy. However, just a few weeks before we go to the polls, the overwhelming majority of British Jews are gripped by anxiety. During the past few years, on my travels through the length and breadth of the UK and further afield… the question I am now most frequently asked is: What will become of Jews and Judaism in Britain if the Labour Party forms the next government?”

At its heart was the assertion, hotly disputed by Labour’s leader Jeremy Corbyn, that “anti-Jewish racism” now permeates the main opposition party. Charged Mirvis: “A new poison – sanctioned from the very top – has taken root” in Labour.

And its extraordinary goal, all but explicitly stated, was to discourage the British electorate from voting Labour. “It is not my place to tell any person how they should vote. I regret being in this situation at all,” Mirvis wrote near the end of his piece, summing up the predicament. “I simply pose the following question: What will the result of this election say about the moral compass of our country? When December 12th arrives, I ask every person to vote with their conscience. Be in no doubt – the very soul of our nation is at stake.”

So blatant an effort by a chief rabbi, invoking moral authority, to steer an electorate in a democracy away from a mainstream party, and at the height of an election campaign at that, would be resonant and dramatic in any country. In a Britain renowned for mainstream tolerance, and in a Britain where for decades it has been second nature for the Jewish community (perhaps 300,000-strong, less than 0.5% of Britain’s 66 million population) to keep a low profile, the resort to a gevalt op-ed was nothing short of a bombshell.

So why did Mirvis do it?

The Johannesburg-born chief rabbi, who is mild-mannered by nature, would plainly have agonized long and hard before sallying into print. His office has had its political associations in the past — Conservative prime minister Margaret Thatcher looked to one of his predecessors, Lord Jakobovits, as a key adviser and moral authority — but is anything but a confrontational institution. Whatever the private voting preferences of a chief rabbi, the holder of office interacts routinely with government and opposition politicians, and simply doesn’t take a partisan stance.

Corbyn was for decades a fringe figure on the British hard left, but in 2015 a series of long-odds events contrived to hand him the leadership of Labour — the traditional political home of British working class Jews and, more recently, the party of prime ministers Tony Blair and Gordon Brown, both of them warmly disposed to the Jewish community and to Israel.

Corbyn is emphatically not well-disposed toward Israel. I detailed his lifelong anti-Israel obsession here last year, and argued that his singular focus on the perceived iniquities of the world’s only Jewish state tipped firmly into anti-Semitism. He argues strenuously, however, that he is anything but an anti-Semite — indeed, he insists that he has spent his entire political career battling racism.

How to explain the disconnect? And how to explain that his rise to the helm of Labour has emboldened a plague of anti-Semitism in his party? As Mirvis wrote, “We sit powerless, watching with incredulity as supporters of the Labour leadership have hounded parliamentarians, party members and even staff out of the party for facing down anti-Jewish racism… Now, astonishingly, we await the outcome of a formal investigation by the Equality and Human Rights Commission into whether discrimination by the party against Jews has become an institutional problem… The way in which the leadership of the Labour Party has dealt with anti-Jewish racism is incompatible with the British values of which we are so proud – of dignity and respect for all people. It has left many decent Labour members and parliamentarians, both Jewish and non-Jewish, ashamed of what has transpired.”

One explanation is that Corbyn cannot allow himself to internalize that Jews could be the victims of racism — absurd though that may sound given the events of 80 years ago. Hence his insistent refusal to apologize to the Jewish community for the anti-Semitism spilling out of his party, including in a BBC television interview on Tuesday evening — an interview that meant Mirvis’s cri de coeur, front page news in most British dailies on Tuesday morning, dominated the news cycle for a further 24 hours. He simply cannot see an overwhelmingly white and relatively affluent community as a potential victim of discrimination.

In the world view of Corbyn and the acolytes who now dominate Labour, after all, the great evils of the past century are colonialism and capitalism, and the symbols of those evils are bankers and financiers, landlords and media barons — some of whom just so happen to be Jewish. Victims? In this view, it’s Jews — and certainly Zionist and wealthy Jews — who are among the oppressors. Emblematically, Corbyn is a man who initially defended an East London mural depicting, as described by ToI’s Robert Philpot, “a group of men – seemingly caricatures of Jewish bankers and businessmen – counting their money on a Monopoly board balanced on the back of naked workers.”

Interestingly, having apparently concluded that Corbyn may not regard anti-Semitism as racism at all, Anglo-Jewish leaders, including Mirvis in his article, have taken to highlighting Labour’s “anti-Jewish racism.” 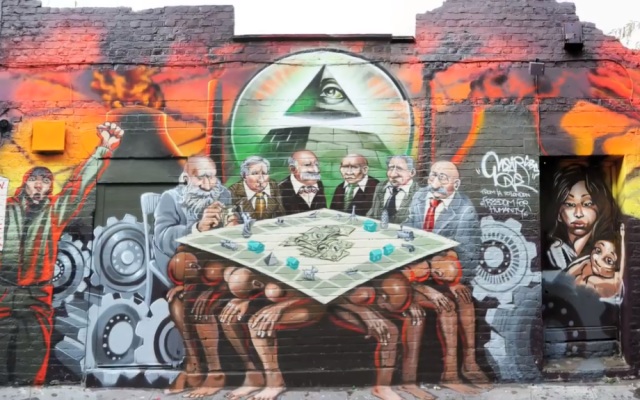 Sitting in his chief rabbi’s office, aware that amid the current unpredictability of British politics, Corbyn could walk triumphantly into Downing Street on December 13, Mirvis evidently decided that he was in a no-win situation.

If he spoke out, and warned of the dangers of a prime minister Corbyn — and perhaps even more so of the dangers of some of the smoother, more dangerous figures who have advanced in Corbyn’s slipstream — Mirvis would be castigated as a Conservative and Zionist stooge, accused of betraying the political impartiality of his office, and left with no access to the corridors of power were Corbyn indeed successful on election day. But if he was silent, and failed to sound the alarm, and the Jewish community — part of which has already begun to talk of emigration — found itself facing still greater hostility in a Corbyn-led Britain, would he rue his passivity, would he have ducked his moral and religious duty, and would he be judged by history to have failed his community?

Evidently, Mirvis concluded that there was more to gain by publishing his article –that if an opposition Labour party mainstreaming anti-Semitism was dire, then, as he put it, “What should we expect of them in government?” Better, if at all possible, not to find out.

The chief rabbi would have realized that his article would cause a furor — though it likely resonated still more than he would have anticipated. A week earlier, it might have been edged aside by the misfiring effort by Prince Andrew, in a cold, haughty BBC interview, to disentangle himself from Jeffrey Epstein.

Whether it will impact the elections is another question. Britain is going to the polls mainly over Brexit, with the National Health Service and the economy also prominent issues. Labour anti-Semitism is in the mix somewhere, but how much of a factor it will prove in anyone’s voting choice is impossible to gauge with any credibility.

If Labour wins, Anglo-Jewry may indeed find the doors of Downing Street closed in its face. But then again, its key leaders — of whom Mirvis is the last, not the first, to speak out — would not have wanted to enter in any case.

If Labour loses, the Jewish community may find itself widely blamed by Corbyn loyalists, and face more of the hostility it already endures.

A price worth paying, Mirvis would presumably have sighed, as he pressed Send.