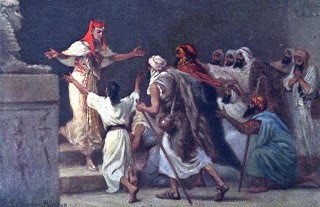 As a juvenile middle schooler, I thought that the following Torah passage and commentary were just too embarrassing for words:

“Come close to me, if you please—Seeing that his brothers shrank from him in shame, he spoke to them gently and showed them that he was circumcised.” (Rashi, commentary to Genesis 45:4)

Over half a century later, I have lost my discomfort at that passage, and indeed, I think it contains a timely message for us in our current moment of crisis.

In the days of Joseph and his brothers, there were very few markers of Jewishness. People did not wear kippot or Star of David jewelry. Hebrews were circumcised. Although there is ancient Egyptian art showing that Egyptians practiced that, too, the rabbinic comment only makes sense if the Rabbis thought that Jews were different from their Gentile neighbors in that respect.

So, it’s not just a game of “I’ll show you mine if you show me yours.” Joseph is taking the bold step of showing his brothers what his words alone are failing to accomplish, that he is, indeed, their brother.

Even so-- and granting that standards of modesty may vary in all-male circles from one society to another--I think that the Rabbis themselves, who created the commentary, would have felt that they were in the territory of the extravagant. After all, they could have spun a different midrash, along these lines: Joseph said, come close, if you please. When they were close enough so that he could speak in a whisper, he reminded them of all the details of their life in Canaan that no one but Joseph could have remembered. He drew them close to spare them embarrassment, because he did not want any Egyptians hearing his tale of their jealousy and unsavory actions.

The Rabbis told their midrash, not mine. What was their point? That a Jew needs to do what it takes to connect with fellow Jews at a time of distress.

That’s where we are today. It’s open season on Jews. We are literally suffering attacks from left and right.

Now is not the time to indulge in our habitual partisan analysis. Anti-Semitism is real, from the several quarters of the political compass card. Rather than ignoring the anti-Semitism from the allies of “our” camp, and only calling out the anti-Semitism from the allies of the “other” camp, we need to be honest about the perfect storm that we are facing. Orthodox Jews are being attacked, because they are most visibly Jewish. If you are non-Orthodox (as are most readers of this column), you must recognize that this is an attack not on “them”, but on “all of us.”

Joseph “came out” as a Jew, at a critical moment. We can and should do that now, as well.