Illustration: An American Sukkah, New Hampshire
About this time of year, we often hear a Jewish claim that the Thanksgiving holiday is based on the Jewish festival of Sukkot—The Feast of Booths. True, the basic idea of giving thanks for God’s bounty, and especially at the time of the Autumn harvest, is consistent with Judaism. The Bible says that we are to be especially happy at Sukkot, the time of the full harvest, and to recognize that our plenty is God’s gift, not the unaided work of our hands.
But the specific claim that Thanksgiving is on the model of the Sukkot festival is, alas not true. The claim represents a leftover of Jewish anxiety, that we should prove how solid are our American credentials. After 368 years in this land, we can stop trying to prove that! 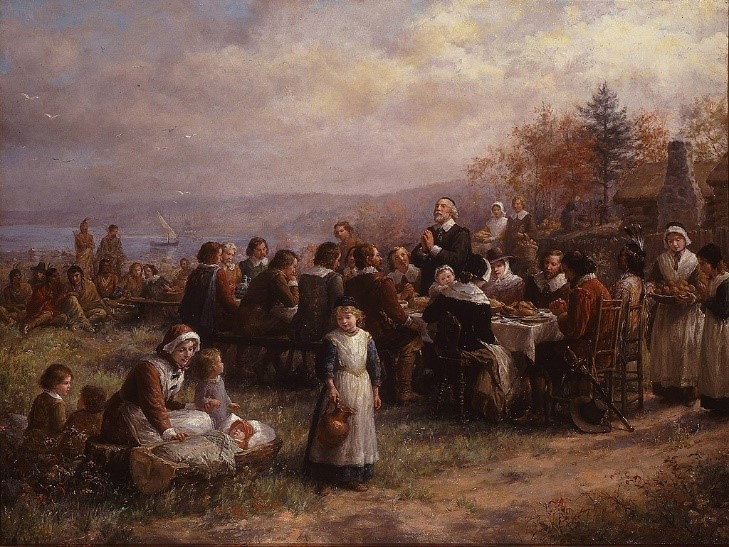 Illustration: Jennie Augusta Brownscombe, Thanksgiving at Plymouth, 1925. National Museum of Women in the Arts.
The holiday of Thanksgiving has its roots in Protestant Christianity, especially Puritanism. It is part of a matched pair of special and occasional days of religious intensity that Christians would proclaim from time to time, days of “humiliation and fasting” on the one hand, and “thanksgiving” on the other. Note this encyclopedia definition of “days of humiliation and thanksgiving”: “In Protestant Christianity, a day of humiliation or fasting was a publicly proclaimed day of fasting and prayer in response to an event thought to signal God's judgement. A day of thanksgiving was a day set aside for public worship in thanksgiving for events believed to signal God's mercy and favor. Such a day might be proclaimed by the civil authority or the church.”
Days of “humiliation and fasting”, on the one hand, and of “thanksgiving”, on the other, were popular in Puritan-dominated Colonial-Era New England. Consider, for example, the following regulations for Yale College in 1701:
“Every student of the College shall diligently attend upon the duties of religious worship, both private and public of the Sabbath Day, and shall attend upon the said public worship of Good in the meeting house with the President and Tutors [of the college] on the Lord’s Day and on days of public Fasting and Thanksgiving appointed by Authority…” (Yale College “Rules”, #4, in Religion in America, ed. James T. Baker,  vol. I, p. 49.)
The November Thanksgiving in America, therefore, is a child of Puritanism, not of Judaism.
But the story does not end there.
The Puritans saw themselves as a “New People Israel.” They believed that they were cut in the same mold as the Jewish people — that, like the Children of Israel, they were escaping a land of oppression, traversing a wilderness --- in their case, the trackless Atlantic Ocean—and arriving at a Promised Land—America was their Canaan-land.  They believed that, like the Children of Israel, if they kept God’s Covenant, they would be granted God’s special providence, guaranteeing them success, but punished severely if they broke faith. 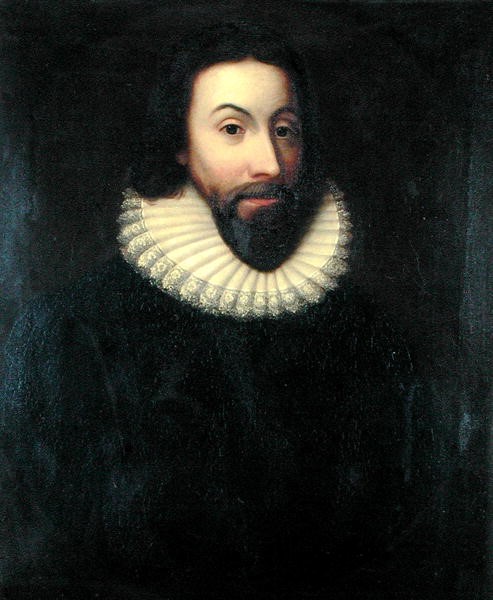 Illustration: John Winthrop
John Winthrop, leader of the company that established the Massachusetts Bay Colony, developed exactly this theme as he preached to his fellow colonists on the eve of their departure for the New World. Hear how he drew from the cadences of Deuteronomy:
“We shall find that the God of Israel is among us, when ten of us shall be able to resist a thousand of our enemies, when he shall make us a praise and glory, that men shall say of succeeding plantations: The Lord make it like that of New England… So that if we shall deal falsely with our God in this work we have undertaken and so cause him to withdraw his present help from us, we shall be made a story and a by-word through the world… And so, to shut up this exhortation of Moses, that faithful servant of the Lord, in his last farewell to Israel…. ‘Beloved, there is now set before us life and good, death and evil in that we are Commanded this day to love the Lord our God, and to love one another, to walk in his ways and to keep his Commandments and his Ordinances and his laws and the Articles of our Covenant with him, that we live and be multiplied and that the Lord our God may bless the land whither we go to possess it… Therefore, let us choose life, that we, and our Seed, may live!’”
Putting it together: 1) The Puritans saw themselves as a latter-day incarnation of the people Israel. Their piety was much influenced by the Hebrew testament;  2) They believed that God ruled over their affairs with a special providential solicitude, rewarding them for their piety and punishing them for their failures; 3) They saw natural disasters and political setbacks as a sign of divine disfavor, and conversely, natural bounty or political success as a sign of divine favor, and therefore--  4) they declared days of “Fasting and Humiliation” to turn aside God’s wrath in times of loss, and days of “Thanksgiving” to keep God’s favor in times of bounty.
We may conclude by saying that, if Judaism was not the parent of the American Thanksgiving holiday, it is certainly one of its earlier ancestors!
Happy Thanksgiving!